Casper Returns for Under Saddle Training

Some of you may remember baby Casper, who has been coming here annually since he was a weanling.  He's a morgan with an incredibly quiet and intelligent mind, bred to think and work.  His owner, who also bred him, is very invested in his success and soundness long term as both a riding and driving horse. 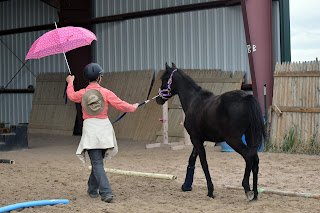 These first photos are of Casper as a weanling, the top one was him visiting for a Bit of Honey Circus clinic, and the second was when he came to live here for a while with Uncle Fason to learn good baby horse manners. 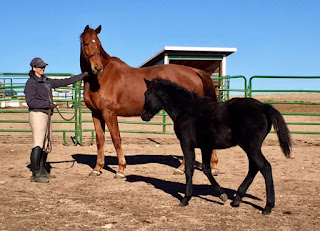 As he has grown up, Sally has taught him all the things every good baby horse should know.  Now that he is four years old, he's ready to be started under saddle, and his ground work is so thorough that he's lobbying for the title of Easiest Horse to Start Under Saddle!  He already knows all his voice commands, how to wear tack (including all the accoutrements that go with driving a cart, which he also does), and has been here frequently enough that nothing here is a surprise.  Dogs, umbrellas, trees in the arena with other jump decorations, nothing phases him.

For his first ride we worked in the round pen.  I lunged him briefly first to help him realize I used the same voice commands that Sally does.  Then we went to the mounting block, and I casually climbed on from each side, also dismounting from each side.  He just stood there, occasionally touching noses with the dogs.  We had a straightforward and simple ride of walking, stopping, and turning, then quit while he was wanting to do more. 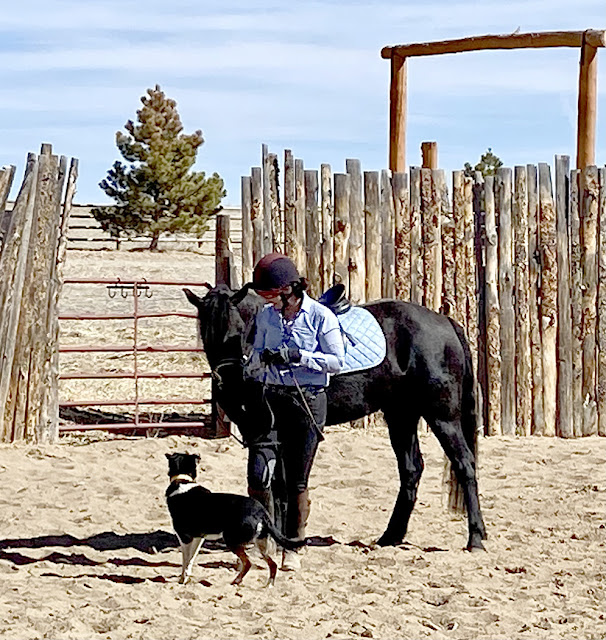 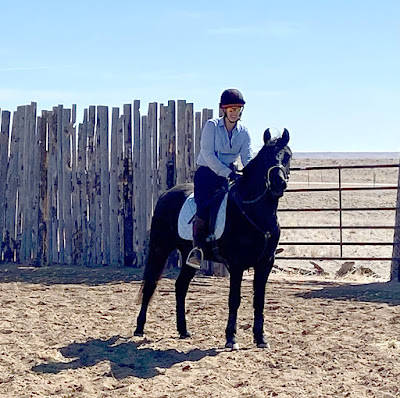 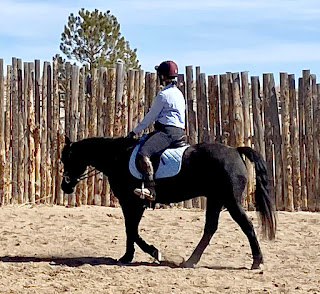 His second ride was equally uneventful.  I took him to the arena and lunged him a little so he could look at everything.  Other than tasting all my plastic trees and being disappointed they weren't edible, nothing really bothered him.

Here is the video from his second ride, which was also his first time trotting under saddle.

When young horses first start under saddle it always is humorous to watch, as it's very much like riding a wet noodle.  He knows all the voice commands and how to steer, but he's learning how to do it all with the weight of a rider aboard.

During his third ride he was in the arena with two other horses.  This was quite confusing to him initially, because the other horses would walk, trot, and canter around the arena, but Casper was supposed to do whatever I asked, and not necessarily what his friends were doing.  He did figure it out, and walked and trotted nicely while the other two were standing.  My proudest moment was when a loud old flatbed trailer towed by a noisy pickup went by on our road, and blew a tire with a sound like a gunshot.  Casper's "big spook" was to hop sideways and turn to face the noise.  I patted him for being so good, and he promptly relaxed and went back to calmly walking around.  THAT kind of thing is what earns a baby horse his Easiest Start Under Saddle title!

Posted by Bit of Honey Training LLC at 10:55 AM

Email ThisBlogThis!Share to TwitterShare to FacebookShare to Pinterest
Labels: Casper