We had an impressive blizzard this weekend!  We probably got two feet of snow, but with the 40mph wind it blew into drifts anywhere from 4' to 12' tall depending on where you go around the property.

I tried to go out to take care of horses, but quickly discovered that I had to cross drifts that were not passable in mere muck boots.  I post-holed it a couple times, and if I tried to push myself up with my hand, then my arm sunk into the snow.  There I laid, pondering how I was to extricate myself from the giant drift.  I ended up putting weight on my side, and essentially dancing The Worm as I wiggled around doing a full shoulder shimmy.  That packed the snow enough that I was able to climb out.  Meanwhile, I had both dogs on a leash, and they were jumping into the snow, and promptly disappearing as the snow was much deeper than they were tall.  It was good that they were on leashes, since I had to tug them out of the drift so they could hop another stride forward.

This first foray into the great white barnyard made it clear that I needed to find my snowshoes, and find them before the next feeding.  I dug around in the garage, and managed to locate them with our camping stuff.  They made getting around infinitely easier, as I'd sink approximately six inches into the snow with the snowshoes on, rather than up to my hips.  I stomped a bit of a path with the snowshoes, and then even the dogs could get around well enough in my packed snow path.  Rizzo with her short hair wasn't super happy about being outside doing  barn chores, but at least she had her dog blanket on.  Pascal with his longer coat was perfectly pleased to be having an adventure.

The horses handled the storm well.  I'm always amazed at how tough they are compared to us humans.  Some warm mash for everyone and scooping feet of snow out of the water tanks and they were just fine.  I did have to do the horse blanket shuffle a few times as I traded wet ones out for dry.

After I removed soaked and frozen blankets, I had to determine where I'd put them to hang and dry.  With the storm continuing to rage outside, I decided to toss them over the wall of the stall in the barn so they could hang there.  I grossly underestimated the strength needed to heave wet frozen heavyweight blankets over a stall wall.  My first toss resulted in the entire blanket falling short of the wall, with ice and snow from the blanket cascading down over me and into my coat.  I managed to unearth myself from the cold fabric, and got myself a stool.  With the extra height I could then get the blankets up and draped over the wall.

Before the power went out I watched a bunch of muppet movies as the storm rolled in.  Because of this I had some images of Kermit fresh in my mind and I did have a chuckle when I got Silver all bundled up.  His hood is a bit big for him, so when I got him dressed he looked quite a bit like evil Kermit from a muppet movie. 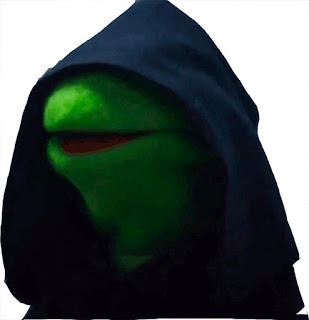 We did lose power for about a day and a half.  It was ok in the house, we had stocked up on bottled water in milk jugs so we had enough to drink.  The house is insulated well enough that we didn't get too cold, just down to the 50s inside.  Thankfully the horses' water tanks had all been topped off before the storm hit, so even though I didn't have running water outside either with the power out, the horses all had enough to drink.  It was awfully nice to have a hot shower once the power came back on, though!

After the storm ended I went for a walk in my snowshoes around the property with the dogs to take photos.  Highboy as usual wanted to steal the show. 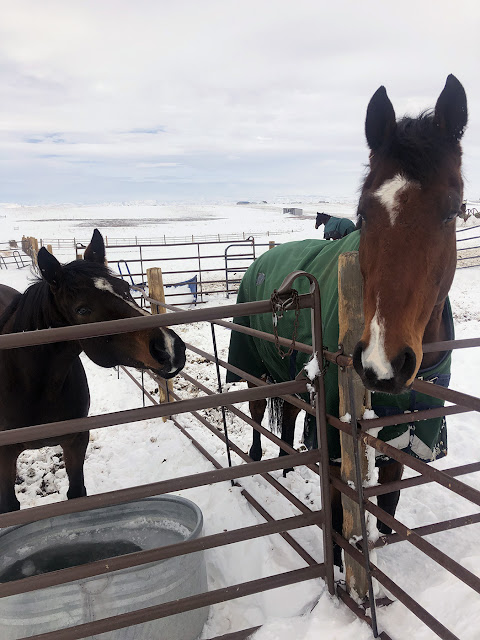 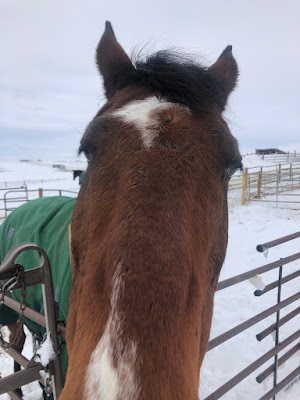 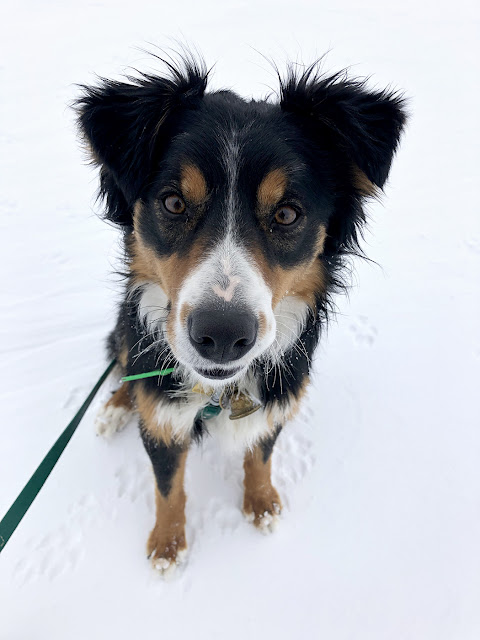 The dogs enjoyed walking around after the storm.  Most of the drifts had a crust on top that they could stand on.  The magnitude of the drifts was truly impressive. 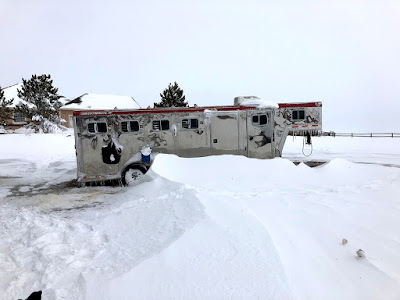 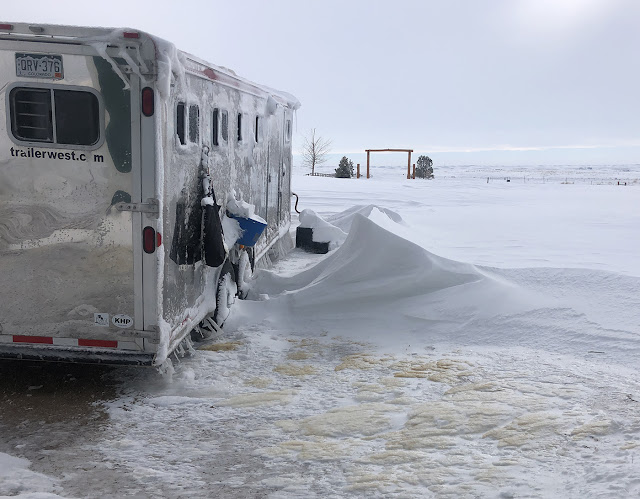 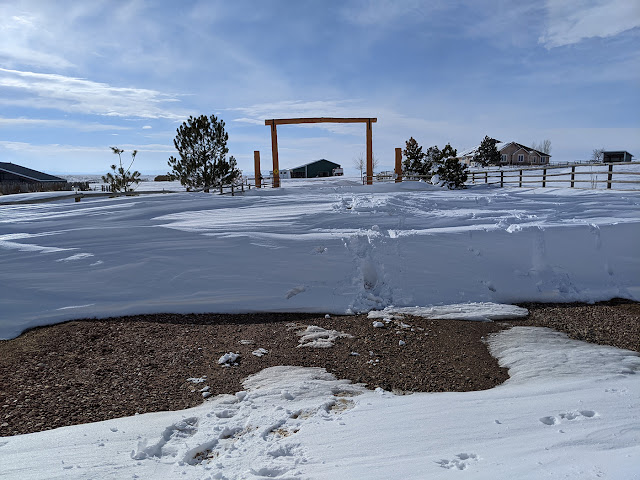 The drifts across the driveway were taller than our subaru.

Around the back side of the barn the snow drifted conveniently, leaving me a path to get to Beauty and Sloane's paddock. 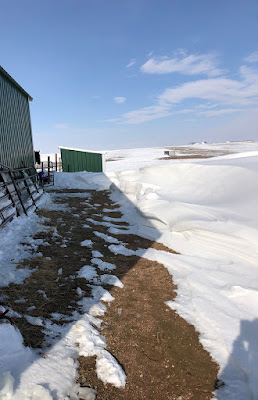 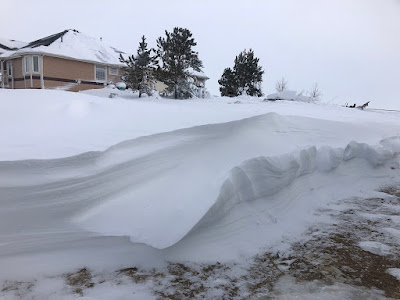 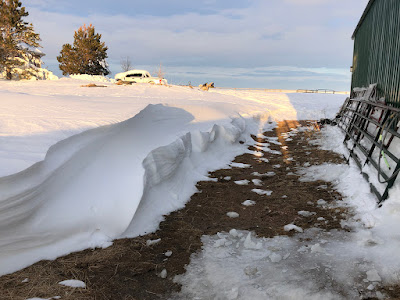 Once I got to Beauty and Sloane's pen I saw the drift inside it.  It was taller than the horses, so they couldn't get to their water or hay.  I put hay and some buckets of water in their loafing shed, and photographed the drift from standing on top of it.  If the horses had been able to climb it they could have walked over the fence right out of the pen. 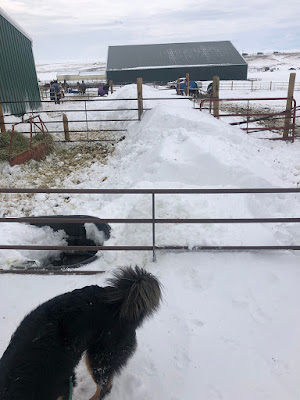 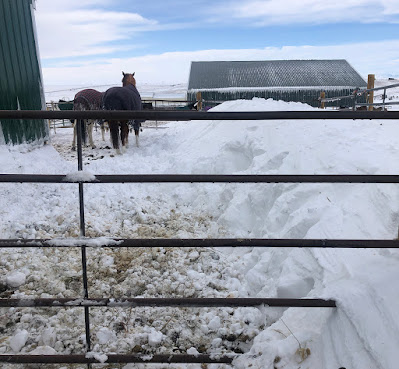 The arena had impressive drifts on the North side.  They were tall enough that the panel fencing along the wall was entirely buried.

Oddly with the wind blowing as it did, the outdoor portion of the arena doesn't have much snow in it, but the indoor has several inches. 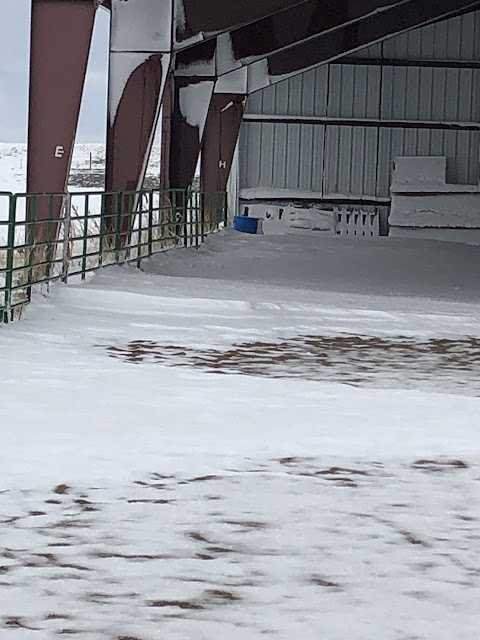 I think the most impressive drifts were around the round pen.  I was standing on a 12' drift inside of Daisy's paddock when I took this first shot of the outside of the round pen. 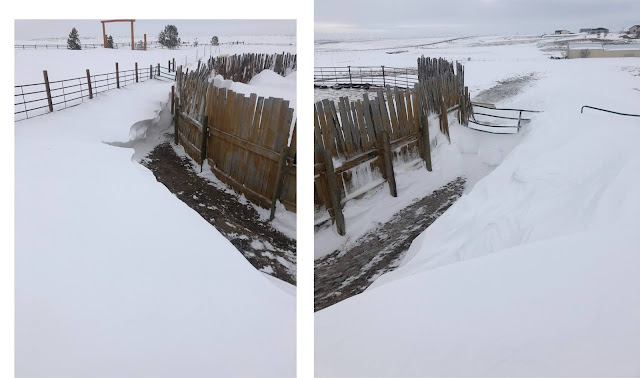 I was walking towards the round pen from the arena when I got this panorama of the drift outside the round pen:

I took this panorama of the inside of the round pen and the drifts that are as tall as the walls.

These next shots are of the west gate into the round pen - totally blocked with snow nearly as high as the wall.  It will likely be a while before we're using it! 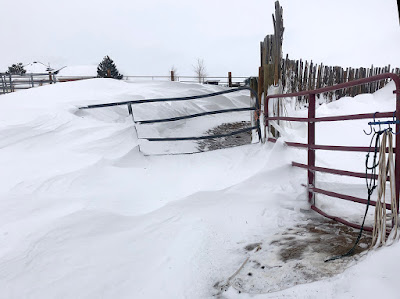 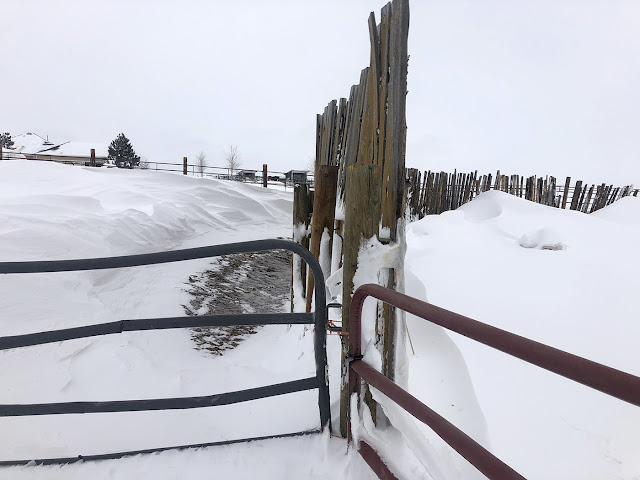 The picnic table was buried. 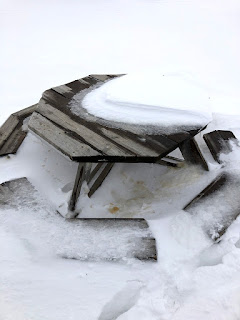 This was Darby and Appy's loafing shed.  I was impressed with how the snow blanketed the building.  It seemed to seal up any drafts, and both of the old folks were quite comfortable in their shed as the storm blew all around them. 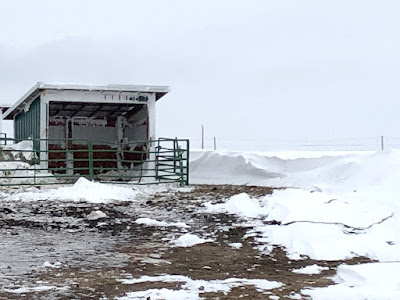 This was the west pasture shed, farthest away from the house.  The snow drifted halfway up the height of it.  I don't have any horses living in this pasture right now, but it's good to know they would have had protection! 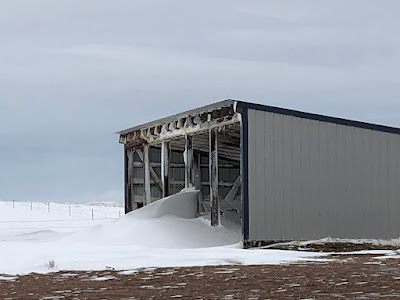 We did naively attempt to plow the driveway with my ancient lemon of a tractor.  It was a futile attempt, the tractor was totally unable to lift snow that heavy without losing traction and spinning the back tires.  I got it unstuck and returned it to the garage, deciding we would just have to wait for the snow to melt and feeling grateful we had plenty of food and water despite the power being out.

This is the view looking out the side door of our garage, the trash can is buried in the drift. 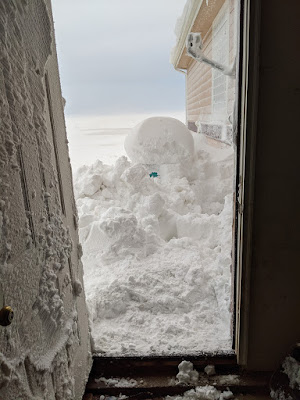 This is the view of the garage side door once Owen had dug it out: 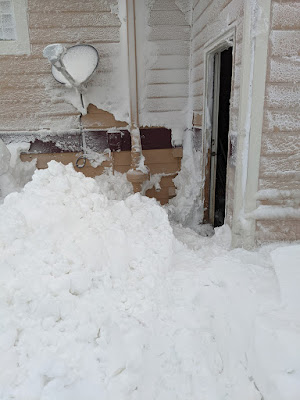 Later in the day we got a phone call from a super generous neighbor.  He had a much heavier tractor and asked if we needed to be plowed out.  He then came over in the evening and spent a couple hours creating a path for us to get a vehicle out of the driveway.  We are incredibly grateful and will be sending thank you cookies forthwith. 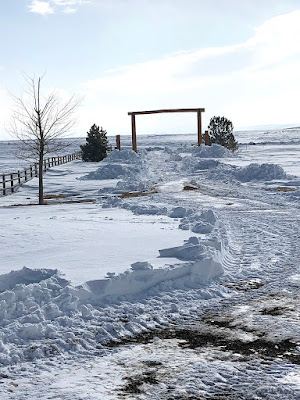 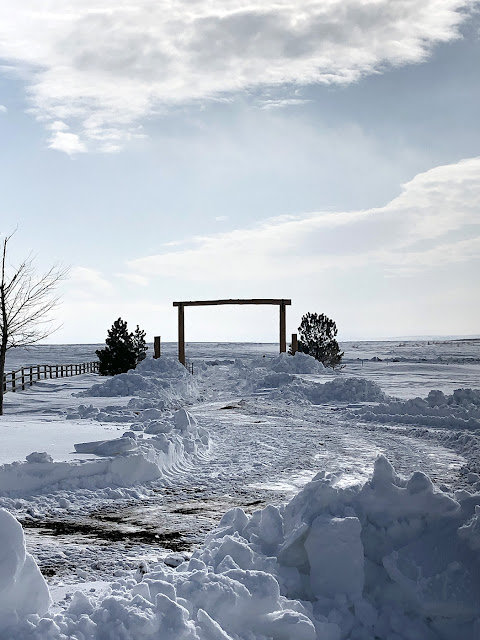 And for perspective, this was the drift in the back of the house, which continued all the way through Beauty and Sloane's paddock, and halfway into the big paddock on the south side of the barn. It's not an optical illusion, the drift really is about as tall as Owen. 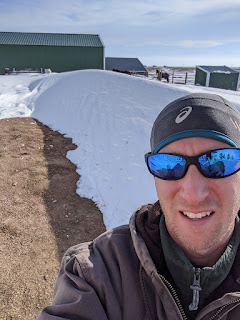 This was a very impressive storm.  I'm so thankful all the animals weathered it well, and I have a renewed appreciation for electric power as well as running water.  Considering we have lived here for 6.5 years and this is the first time we've had something of this magnitude, I think we're pretty lucky.  We've had big snow drifts before, but this is a new level.  It reminds me a bit of growing up in Massachusetts.  I do remember one winter there when we had enough snow that we had to toss my younger sister out the window so she could dig out the front door and we could leave the house.

Keeping in mind that there is an overhang over the front door here in Colorado, this was our front door this weekend: 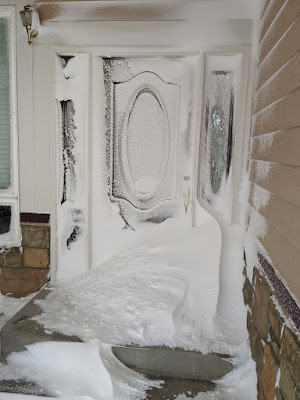 All's well that ends well, and now we do have a fun story and incredible pictures to document our spring blizzard adventure!

Posted by Bit of Honey Training LLC at 1:55 PM

Email ThisBlogThis!Share to TwitterShare to FacebookShare to Pinterest
Labels: Snow