No Hoof, No Horse!

Fason had to stay home during the horse expo, which was a bummer since he had many fans who were eager to meet him in person down in Denver last weekend.  He had to miss the big event because of some very normal challenges that come with the lifestyle overhaul he is experiencing after coming to the ranch from the racetrack.

This first photo is of Cole, my lesson horse, who has nearly perfect hooves.  They are wide, tough, wear evenly, and are balanced.  My farrier often says that if every horse had hooves like Cole he would be out of a job!  In this photo of a very clean hoof you can even see the part of the hoof called "the white line" where the outside wall meets the inside of the hoof. 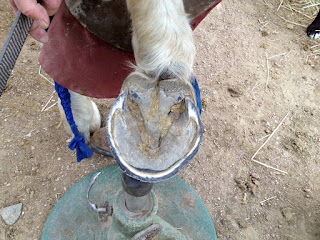 At the track the horses are kept shod all the time, usually in aluminum shoes that are changed approximately every four weeks.  They also keep the toe quite long at the track, and the humid climate where Fason was living and racing in Kentucky was very different from our hard dry environment in Colorado.

Here in "nearly Wyoming" the soil is rocky and hard.  Because of this, the switch to going barefoot or being shod only in the front takes some time for the horse's foot to adapt.  When Fason was first turned out in his paddock he ran around, and his hooves chipped on the hard ground.  Because of his many years being shod and maintained differently, his hoof wall had become somewhat shelly and the outer layer was brittle and broke off.  He was not sore, but it looked strange.  Once my farrier, Tyler Garrison with Waverly Forge, came and trimmed Fason he explained that it's not a big deal.  As Fason adapts to our soil and the nutrition I provide his feet will adapt and become accustomed to the footing here.  Because I wanted to make sure that Fason wasn't sore when riding on the hard footing at the horse expo I did put front shoes on him.

This first photo is of his hoof when the shelly outer layer chipped off. 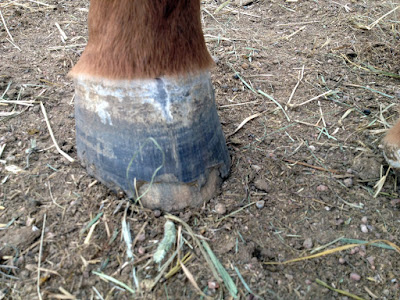 The second photo is of the same hoof, just a couple weeks later after the farrier had been out and attended to him by trimming the toe and rasping the edge to prevent any further chipping. 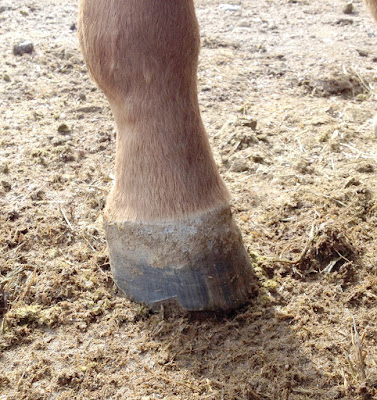 This third photo is of the sole of Fason's foot, this same one that had the dramatic chipping.  You can see that he really has good solid structures on the bottom of his foot, the frog looks pretty good, and the overall shape is not too far off from Cole's ideal foot in the very top photo. 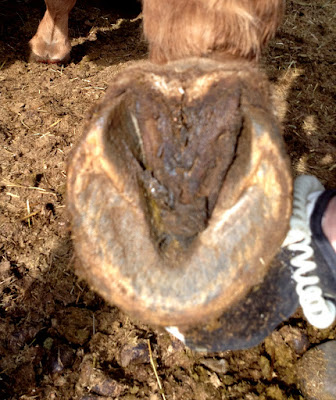 Unfortunately, part of this hoof-changing process included an abscess in Fason's left hind.  This happened because the hoof was somewhat vulnerable due to all the recent acclimations, and we happened to have a snow/rain storm move through that made the ground very wet and mucky for a day or so.  Then, as it does here in Colorado, everything dried out very abruptly.  This sudden change in moisture created an environment where bacteria could enter the soft hoof, then when things dried out so fast the hoof sealed itself creating a pocket in which the bacteria could throw a party.  Within a day or two the abscess ruptured out the bottom of Fason's foot while I was cleaning it with a hoof pick.

Because I worked for years as a veterinary technician and have seen and cared for many horses with these issues, this was not a big deal.  I soaked his foot twice daily in a soaker boot until I left for expo, and Fason stayed home with his foot clean in a poultice wrap and then tougher boot.  This blue one is the soaker boot I like to use.  I like this method because I can put it on, fill it with warm epsom salt water, and leave him for a half hour while I go do other things.  He can even walk around without too much water spilling.  I periodically stop by and refill with warm water, and it's much simpler than soaking a hoof while standing in a bucket that I have to babysit and make sure it doesn't tip over. 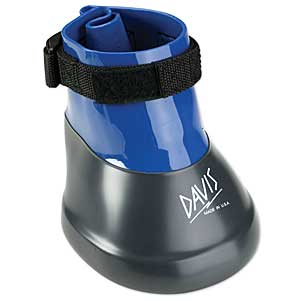 This is a link to purchase the soaker boot

While it looked dramatic with leg swelling and the abscess draining out the sole of his foot, it was a relatively simple thing to clean it by soaking in a hot water epsom salt bath, then wrap it with a sugar-dine solution to encourage the infection to drain.  Fason is an absolute gentleman, and allowed me to apply the poultice wrap including iodine, sugar, betadine solution, diaper, vetwrap, duct tape, and elasticon.  There is always a little giggle when someone discovers I keep a pack of diapers in the tack room.  Mostly they are used for these wraps because they are perfectly sized for a horse hoof, but occasionally I have a friend visiting with a human baby and they need to use one.  Always good to be prepared, right?

I don't have any photos of the hoof wrapping process, I only have so many hands!  Next time I'll get someone to help me by taking some video.  After applying the wrap I then put on an Old Mac boot which protects the poultice wrap and helps keep everything clean and makes the wrap last longer.  I happen to have Old Mac's on hand because I have had barefoot eventing horses who needed a little more protection on the long conditioning rides and so an Old Mac boot went a long way to keep them comfortable as we trained for stronger fitness levels for competition. 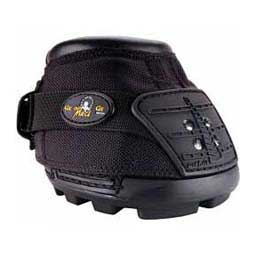 More information about Old Mac boots can be found here

When I returned from expo the swelling in Fason's leg was gone, and he was walking normally on that foot.  It was a simple matter to remove the boot and wrap, and now his hoof is back to adjusting to our Colorado terrain and climate.  I'll be sure to keep his hooves picked out, treated with iodine, and make sure he has clean, dry footing to stand on while he eats to minimize the chances of an abscess happening again. 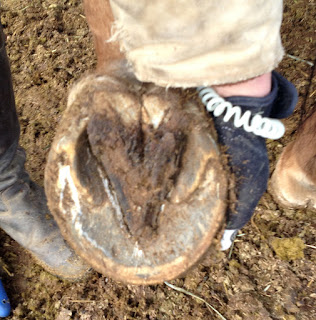 This is of the bottom of Fason's hoof, with it all cleaned out and ready for treatment. 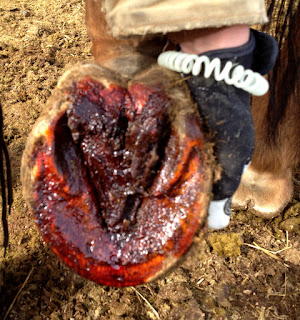 It's all a very normal part of transitioning a horse from track life to sporthorse life, and once Fason's feet adapt he will be in great shape.  Most of my Thoroughbreds do well with these hoof changes and going barefoot.  Dewey and Touch A Prince are barefoot, and even Monty went barefoot all winter while he was on vacation. 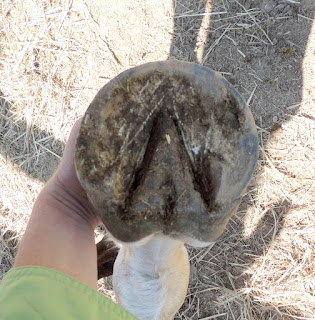 Highboy has great feet, he is barefoot all the time and wears his hooves down very evenly himself.

I do occasionally find a horse whose soles are just too thin to stay comfortable trail riding and walking on rocks if he is barefoot, so I did have front shoes on Major and Thai.  Overall I prefer that the horse be barefoot if he can tolerate it, and despite the reputation Thoroughbreds have for crummy feet, I've actually found them to be more resilient than people expect after they have had a chance to adapt. 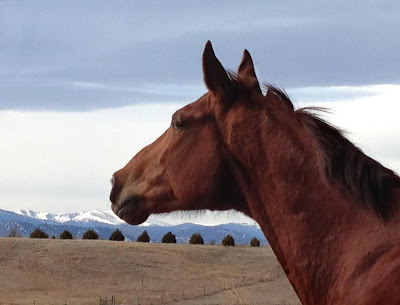 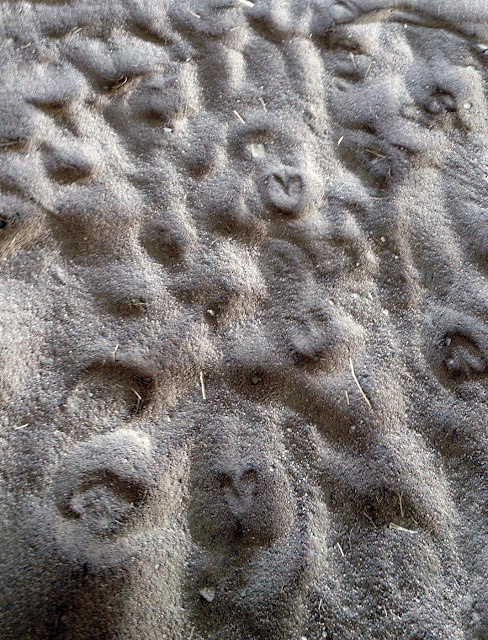 I even like the little heart shapes their bare feet make in the sand in the arena.

Posted by Bit of Honey Training LLC at 5:51 PM