Ferriana and the Walkover Exercise

Recently Ferriana and I did the walkover exercise.  This is the one where I set up two standards and a couple poles in the center of the arena, and I begin by walking over the ground poles once each direction.  I'm basically walking across the arena the short way, with a jump in the middle.  After the horse has gone over it once each direction, I have the jump raised a hole.  With Ferrriana we did this in three inch increments and slowly worked our way up the green jump standards.  Walk over the new height once each direction, then raise it one hole.  The green standards are approximately six feet tall, and we quit when Ferriana was clearing four feet in height out of the walk.  However, she has such thrust with her hind end that she ends up jumping higher with her hind feet than her front feet.  In some of the still photos her hooves are nearly as high as the top of the standards. 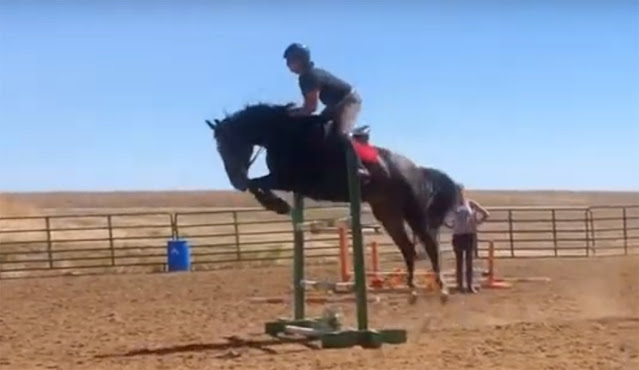 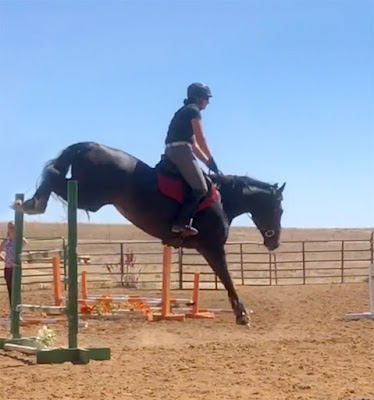 Here is the video of the final fence, set at 4' high:

Here is video of the entire exercise:

It's interesting to watch the whole video and see how she thinks her way through the exercise.  She definitely takes off very close to the base of the jump, which is why she hit her front legs on it several times.  I don't mind this, because in an eventing horse I want them to get to the base of the fence.  Even though she's very athletic and could get over just about anything from a long distance, it's safer to have her take off from the base rather than take off too early and land in a solid fence.  She definitely figured out how to rock back on her haunches and spring up to get over the jump with very little speed.  As the jump got larger I did let her pick up impulsion on the approach, because she needed to have her hind legs "spring loaded" in order to get her body (and mine!) over.

This was a good point in her training to do the walkover exercise.  After the cross country school at Archer where she was a bit over-faced at the hanging log we needed to do something that would boost her confidence and help her feel like a flying superhero again.  During her ride prior to the walkover exercise she was rushing small fences, partly because she was a bit nervous.  The other part of rushing the fences was she thought she needed more speed to clear them.

The walkover exercise taught Ferriana not only to rock back on her haunches and approach the jump in a very collected frame (which she created, not me), but it also taught her she can jump pretty much anything from a walk.  That gave her confidence and helped her realize she didn't need to rush.

Another interesting bit of information I discovered when analyzing the video in slow motion, she pops her back so significantly when jumping, that occasionally the saddle actually hits me in the butt when we land.  In this photo you can see that I land pretty well in a plumb line, so that if you erased the horse I would still be able to stand with my feet under me.  However, the saddle and her back are really high up under me even when she's landing. 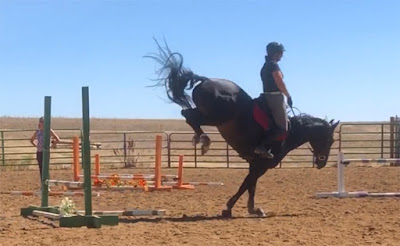 Going back to some of the other photos, you can see the saddle pop up when she really rounds her back. 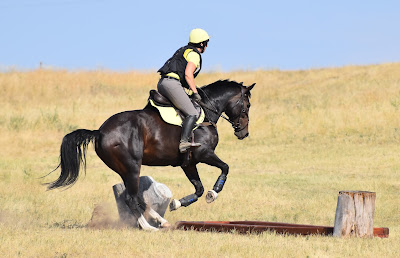 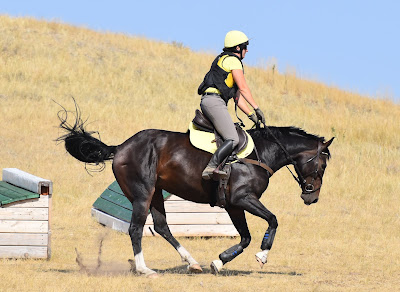 Raven really cracks her back over jumps, too.  I went back into her file on the computer and discovered some photos where this is happening on her as well.  It's not as obvious in her photos because she rides in a sheepskin saddle pad which takes up some of the space, but if you look closely you can see the cantle lifting up off her back.  It's not as pronounced on Raven so it doesn't cause me as many issues when I ride her, but I definitely am noticing the butt-slap with Ferriana. 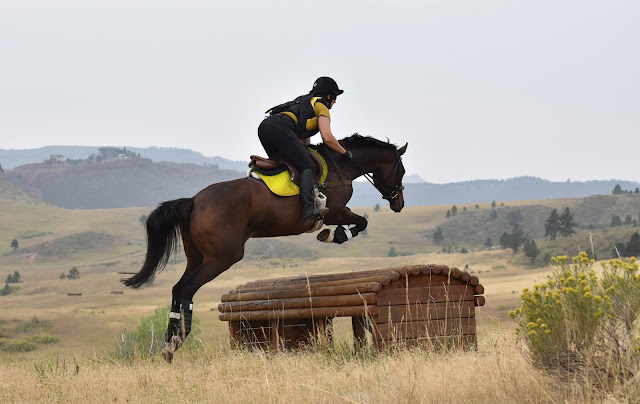 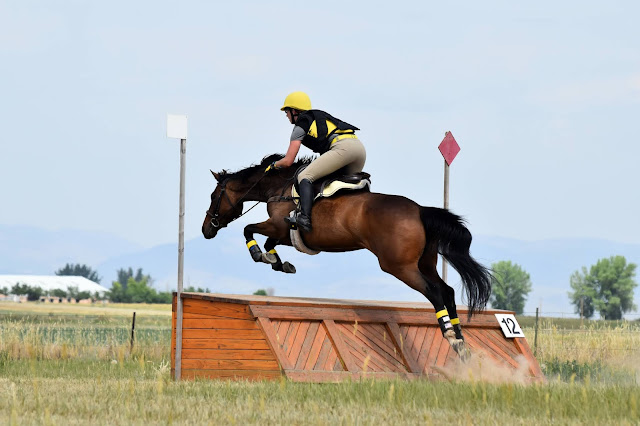 My plan is to have the flocking in Ferriana's jump saddle altered slightly  to see if we can change the balance enough that I don't get popped in the buns over the larger jumps.  The saddle fits her nicely otherwise, and she certainly tells me if something is ill fitting with her tack.  It will be interesting to see what Ferriana thinks of the change and if we can get the saddle to quit popping me in the butt.

Posted by Bit of Honey Training LLC at 2:49 PM