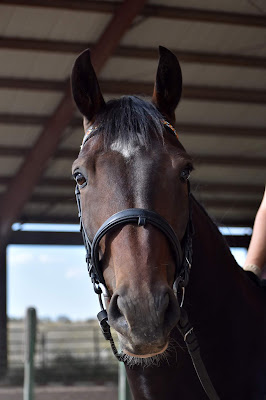 I often tell people:  I can ride bucking, and I can ride spinning, but I'm terrible at riding them both at the same time.

Today I was able to get on most of the horses, and Ferriana was my last ride of the day.  She warmed up well, it's satisfying to see her balance improving every time we ride.  She was wearing the dressage saddle which we hadn't worked in for a couple weeks, but it still fit nicely.  I check tack and equipment really regularly because it's so important that the horse is able to comfortably do the athletic things I ask of them, and also because I have several horses who turn into broncs if the equipment isn't fitting correctly.

We worked on circles, turns, and switching from traveling straight to on a curve in both directions. For canter work we first picked up the right lead (her easier lead), then the left.  We took a little walk break and gave some cookies to Rizzo the dog who was helping with the ride.  Then I picked up the trot again and Ferriana resumed her rhythmic gait.

When I asked for a left lead canter again she picked it up fairly easily, but kept losing her balance in the corners of the indoor arena.  To help with this I added a little inside leg and stabilized her by grounding my outside foot and supporting with my outside rein.  Each time she'd lose her balance I'd get a HUGE buck, like heels over her head airs above ground.  I began thinking through all kinds of possibilities, trying to figure out why she didn't do it earlier in the ride.  Was she getting tired?  Was Rizzo running too closely and causing the bucking in play?  Was the saddle not fitting as well as I thought?  Was she sore?  Was my body fatigue and the soreness I could feel coming after a long day of riding affecting her?

We tried several times to hold that left lead canter through the corner with the same results - a giant buck whenever I tried to help stabilize her.  I then tried a right lead canter, which was somewhat better, but still when I tried to help her balance she'd launch her hind feet into the air.  At one point she bucked hard enough that while I remained seated (see my disclaimer that I'm pretty good at riding bucking as long as there's no spinning), my cell phone was tossed right out of my pocket and landed in the sand.

At this point I decided something was wrong and I wasn't going to figure it out from the saddle.  Before I got off I trotted Ferriana a few times each direction asking her to really stretch and loosen up, which she did.  This made sure she didn't associate my dismounting with the bucking (it would only take one incident and this mare would very quickly realize that bucking was very effective in getting rid of riders).  It also allowed me to rule out some types of pain, since she wasn't bucking at the trot and was comfortable.

Once I was on the ground again I put her on the lunge line to have her canter each direction without a rider.  I wanted to see what she did in the same situation, just without me aboard.  She did this quite nicely, taking each lead easily and successfully cantering a twenty meter circle both to the left and the right.  There was no bucking, no playing with Rizzo, it was generally very civilized.  I took a deep breath to stop her and have her come in the middle of the arena with me, which she did happily.  Ferriana nuzzled my hand, and when I tilted my head to tell her she was a good girl I caught a glance at my left boot.  The zipper that runs along the back of the boot had worked its way halfway down my calf, and the zipper pull was sticking straight out away from my leg.

That explained everything.  Each time Ferriana lost her balance, I'd add a little left leg to help her shift her weight back to her right hind.  Normally this works great, but with the zipper coming undone and the pull sticking straight out, essentially I was spurring her with my calf by poking her with the zipper!  Of course she bucked - she rightly was trying to tell me there was no need to spur her, she understood just fine what to do!

I'm grateful it wasn't a more involved process to determine the issue.  It could have been saddle fit, the dog, attitude, lameness, cold moving in...  anything, really.  It would have been very easy to blame the bucking on bad attitude or naughtiness, and if I'd done that I would have completely missed what Ferriana was justly trying to tell me.  Thankfully all I need to do is be more vigilant about the zippers on those boots and the problem is solved.
Posted by Bit of Honey Training LLC at 6:57 PM

Email ThisBlogThis!Share to TwitterShare to FacebookShare to Pinterest
Labels: Ferriana