Shambhu, Carol, Raven, and I all went for a "town ride" in Fort Collins this morning.  We wanted to hit the trails since we were feeling a little stir crazy, however many of our favorite places were closed because of wet and icy trail conditions.  So we headed to the Southwest section of Fort Collins to Coyote Ridge trail head.  I'd been hiking there ages ago when I was in college, but had never gone with horses. 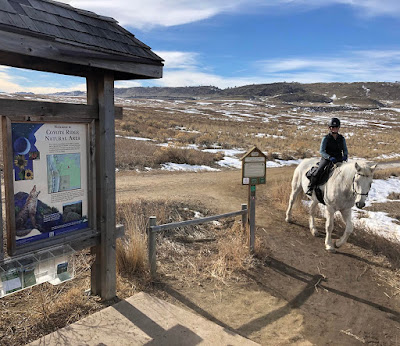 I figured we would have plenty of company since this is a heavily trafficked trail in town, and I was right.  Before we had even mounted the horses, a bus pulled up and unloaded approximately twenty elementary school age kids.  They were all dressed identically in matching black jackets with white stripes, and something about the uniformity of their presentation freaked out poor Shambhu.  He didn't do anything naughty, but he sure froze and stared at them with great angst.

We then started out our ride on the even and flat groomed trail near the parking lot.  Right off a cyclist came barrelling towards us as fast as he could pedal.  I don't know if he had earbuds in or what, but he never seemed to hear Carol and I shouting or see us waving to have him slow down, and when he finally looked up from the smooth path immediately in front of him he was within twenty feet of us.  He then grabbed his brakes hard and squealed the bike sideways towards us, spooking Raven who is relatively new to bicycles.  She leaped into the air and shot sideways, and the cyclist resumed pedaling madly to speed past us.  I don't know what happened to this guy's manners, but they were sorely lacking this morning!  There were signs all over the trails stating that both hikers and cyclists yield to horses.

After that initial drama mostly everyone else on the trail was wonderful.  Hikers, cyclists, runners, and little kids all stepped off the trail to let us pass or to let Raven check out the bikes.  They talked to us which helped the horses realize they were people, not monsters.  The first group of hikers that stopped were making small talk, and Raven sauntered right over to the woman, put her nose near her face, and asked for a cookie!  I quickly corrected her, and thanked the woman for her patience as I explained Raven is new to trail traffic and was asking if she had anything tasty to share.  Fortunately the woman laughed and wasn't bothered by Raven's indiscretion. 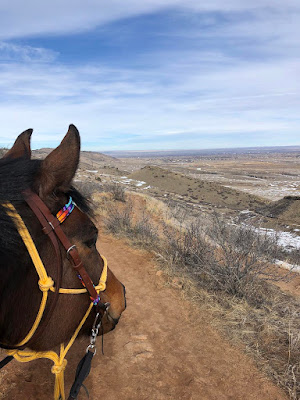 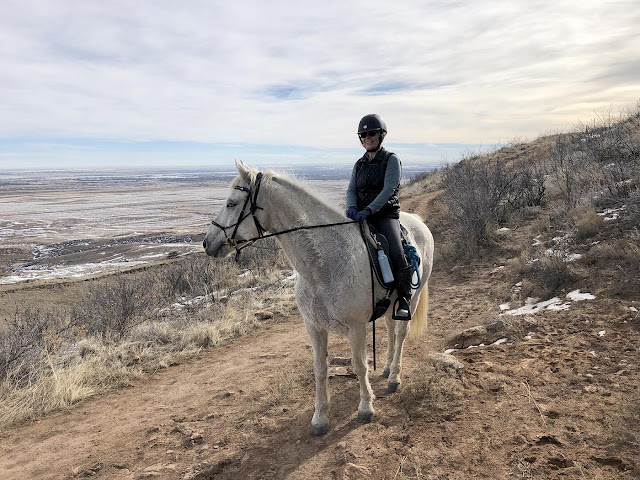 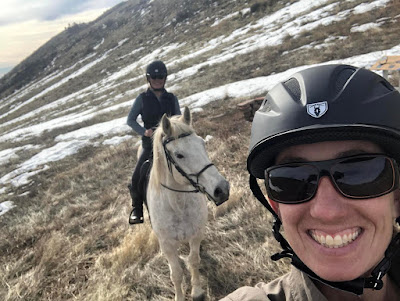 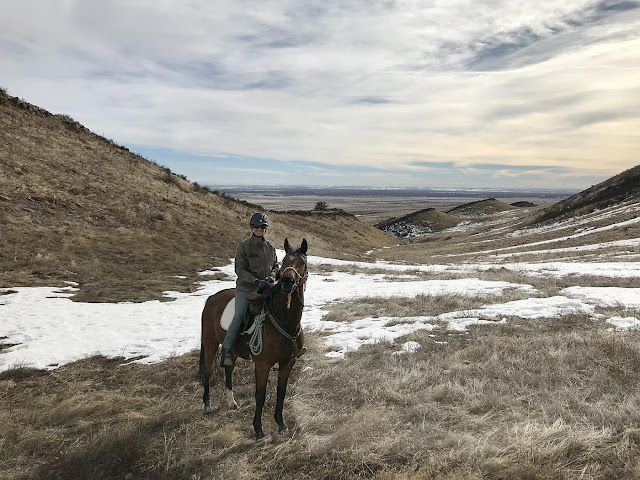 Most of the six mile ride was good footing, however there was one section of trail that stayed shaded all day due to hills, and that part was icy.  Raven has become my "go to" horse, and that's partly because she's so sure-footed even in difficult terrain.  She carefully and confidently made her way up the hill, never putting a foot wrong even when her hoof would break through the crust of snow.  The only other technical aspect was a very rocky segment near the top, but I think I've got one of the only Thoroughbreds with excellent feet and Raven just marched up with near disregard for the rocks and stones. 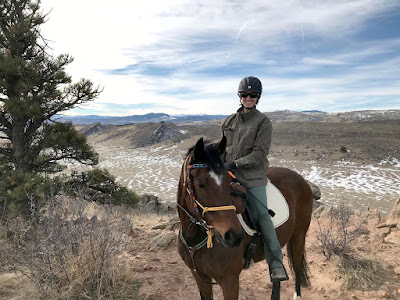 Once we were near the top and the viewpoint we spotted the large group of kids who had previously disembarked from the bus in the parking area.  Carol and I took Shambhu and Raven just off the trail so they could watch the herd of kids as they came down.  There were about four adults with the group, and they had several kids with each of them so they came down in small clumps.  The adults who had the kids with them made them walk so as not to scare the horses, but there was the occasional kid who took off running from a back group to join a front group who had selective hearing and neglected to walk as they'd been told.

Fortunately Raven has seen lots of kids, noisy dogs, and other small quick moving creatures so she wasn't too concerned.  One little boy, probably about eight years old, did slow to a walk, crouched down, and slunk towards Raven with his hands out in front of him like he was going to grab her.  Raven merely stood there and looked at him with disdain.  When she didn't react he then jumped towards her and clapped his hands to see if he could get a reaction.  Raven didn't really respond, but I sure did....  I was pretty loud and clear declaring that wasn't appropriate and it might scare a horse.  (Which was probably his plan to begin with).  He mostly ignored me and continued down the trail.  All the other kids were pretty good, and we made sure to thank them and the leaders for walking towards us. 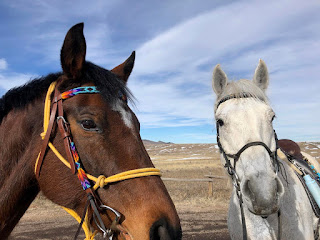 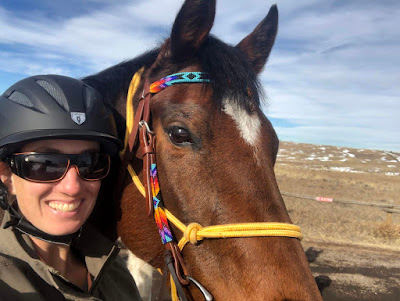 Once we turned around and headed back towards the trailer Raven was ready to kick into another gear.  She did behave, however, and even slowed down when I asked so we could wait for Shambhu, who is careful but less confident going downhill on ice with a drop-off on one side.

Back at the trailer we untacked, liberally dispensed cookies to the good ponies, and headed home.  It was so great to be off the ranch and on the trail, and as a bonus Raven was totally fine with bikes and was ignoring pedestrians by the end of the ride.
Posted by Bit of Honey Training LLC at 4:10 PM