Touch A Prince and the First Bit of Honey Ride

Touch A Prince had his first ride here at Bit of Honey Training.  I tacked him up in my cross country jumping saddle, which fits him really well.  It is shaped just perfectly for the high withered Thoroughbred types with longer backs.  I like to do the first rides with an OTTB in this saddle or something similar, because it's very easy for me to get into a balanced two point position (standing in my stirrups).  A retired racehorse is accustomed to a jockey or exercise rider who perches above the saddle, and until the horse has significantly more muscling through his topline he won't be comfortable with me taking a deep seat anyway.  So a light seat in the jumping/galloping saddle it is. 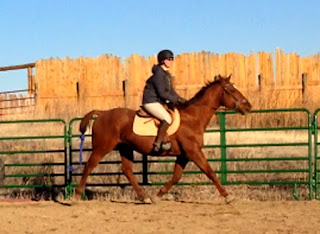 Despite the saddle being a near perfect fit, Touch A Prince was very cinchy again with tacking up this time.  He did the same behaviors, biting the air and pinning his ears like when I put the surcingle on him.  I was careful to stay out of the range of his chomping teeth.  I told him what I tell all the new horses:  "If something isn't right, let me know, and I'll fix it.  If you don't like something, I can change it.  There's no need to bite me, you just have to say so."  Eventually most of the horses will turn their heads and touch the part of the tack that bothers them with their lips so I know which thing to change.  For example, some of the horses will even gently grasp the girth and shake it if it's not fuzzy enough for their liking.  I also need to rule out ulcers and stomach upset being aggravated by tack, but I'm sure we'll figure out what is bothering him, whether it's a pain response or just an old habit he's retained even through all these years of not being ridden.

Because he still needs a dental I had a cushy padded leather hackamore on the english headstall, so no bit in his mouth.  Basically this setup is a padded noseband with reins attached.  When I bridled him he immediately began working his mouth intensely, just as if I HAD put a bit in his mouth.  Often I find this with ex-racehorses, because they associate bridling with going out to run.  The bridle and especially the bit will trigger the intensity of psyching themselves up to work.  I let Touch A Prince stand near the barn, feeding him little cookies, just wearing the tack without a bit in his mouth for a few minutes to let him get acclimated.  Eventually he started shooting me looks out of the corner of his eye as he chewed and worked his mouth, wondering why there was no metal in it.  After a little while thinking about it he decided it wasn't so bad and his demeanor changed to one of friendly interest, his attention back on me.  At that point I knew we had engaged his brain, and so we walked together with the dogs down to the arena.

I lunged Touch A Prince both directions.  He is getting used to my style of cues, the voice commands to walk, trot, canter, whoa, and reverse.  I also incorporate audible breaths for increasing or decreasing speed, and this all usually transfers over into riding work really well.  It certainly did today for Touch A Prince! 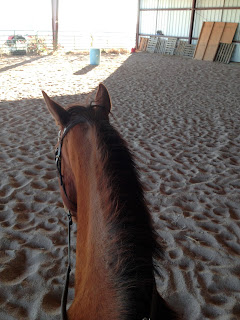 I asked him to stand quietly at the mounting block, and I patted the saddle on both sides.  I leaned over, and then I put a foot in the stirrup and stood up.  His head came up a little with my weight added, but he stood quietly to see what I'd do next.  Because he was being so well behaved I went ahead and swung my other leg over, and gently sat down in the saddle.  He was very business-like, not concerned about me, just wanting to get his job accomplished.  I asked him with the voice command to walk forwards, and then he went with my little quick exhale.  He was understandably a little dull to leg aids, which makes sense because race training steering is primarily with weight shifts since the stirrups are so short.  There were a couple times when he decided he wanted to turn or go one way when I had directed him to go the opposite, but he didn't take much convincing to follow my instructions. 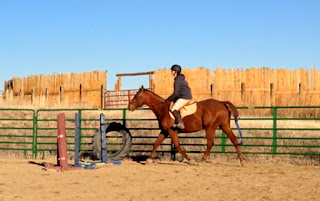 Miles the border collie is a huge help in these first rides with a new horse.  If the horse is unclear about what I'm asking, Miles knows all the voice commands and can demonstrate.  Additionally, he knows that  a clicking noise means "trot", and a kissing noise means "canter".  Miles will run in front of the horse, demonstrating whatever it is I asked for, and when the horse realizes he just has to imitate Miles, the whole training session becomes immeasurably easier.  This worked nicely today for Touch A Prince, even with steering.  Miles knows the figures I'll ask for in these first rides, and the horse just has to follow the dog.  Miles is pretty good with even more advanced work, when he had four legs (he works on three now), he would even run figure eights and do flying lead changes over the ground pole in the center of the arena when I was teaching this to horses.

Our ride went very well once Touch A Prince was warmed up and a little more balanced.  He was very polite about walking and trotting both ways, we trotted some large circles on each end of the arena, and he even was able to pick up both the left and the right leads at the canter.  I suspect his gaits will get even better once he's more fit, but this is a very good start! 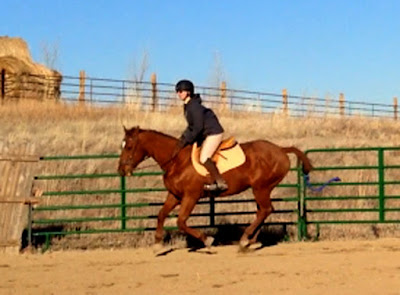 Posted by Bit of Honey Training LLC at 5:34 PM