New Horse Gets a Name and a Second Ride

Saturday was busy with a Kentucky Derby party in Denver at Arapahoe Track and riding horses in the morning before the party.  I had a client here who had a little extra time to take some photos and video of me with the new horse. 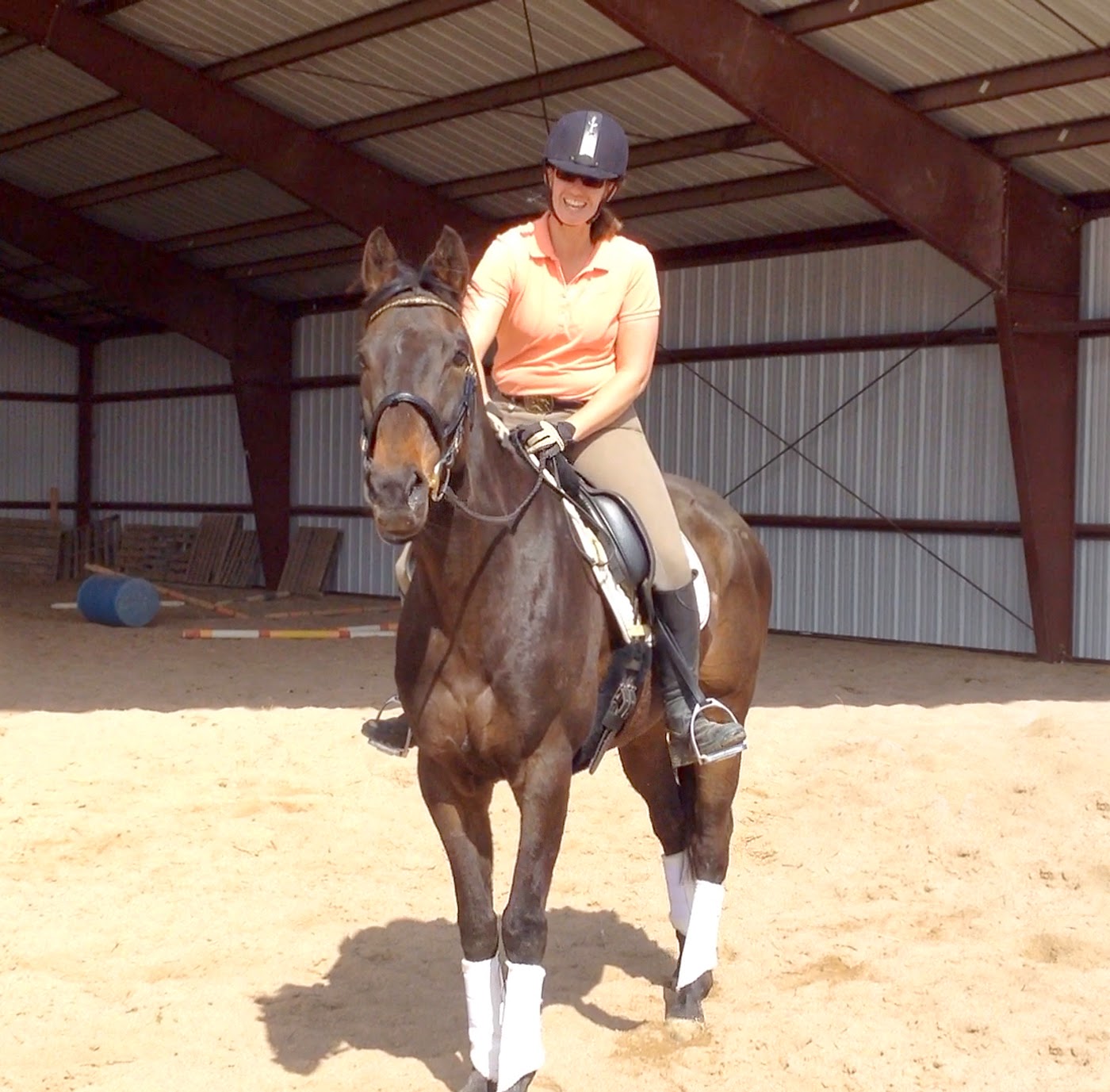 The whole story behind his name is an entertaining one.  When he was purchased by his racing owners he reminded them of Arnold Schwartzenegger, and so they called him Arnie for short, and were going to register him as I'll Be Back with the Jockey Club.  When they went to fill out the papers, though, someone had a momentary memory fail and wrote on the name line: I Shall Return.  Because of that he was called Mac at his first home off the track, since there is an older song titled Return of the Mac.

The new guy has turned out to be quite introverted.  He hasn't expressed too many opinions in the couple weeks he's been here, he just tries to be good and to stay out of trouble.  I've tried calling him several different names, choosing one each day and seeing how he responds.  I've called him Arnie, Mac, Rudy, as well as my little catch-all names like Handsome, Kid, Buddy, and Big Guy.  He is always friendly, but hasn't really indicated that he wants to be called any of those names.  Yesterday it occurred to me to try calling him Schwartz.  In German it means "black", and he's such a dark bay he could be mistaken for a black horse.  It also is a nod to his racing owner's idea of naming him after Arnold Schwartzenegger.

When I went out in the morning on Friday and called him Schwartz, he immediately lifted his head and stared at me.  In case it was a fluke, I called him by that name for a couple days.  If I was close enough to him he would nuzzle me every time I used that name.  Otherwise he would turn his head to face me every time I used it.  So Schwartz it is.

I rode him yesterday morning again and had another wonderful ride.  He is a bit fast and is still trying to find his rhythm, but he has amazing movement when he starts to relax and stretch.  As an added bonus I discovered that my favorite dressage saddle fits him quite well.  When a horse is so new to off track training I generally like to keep them in a jumping saddle so I can more easily ride in a two point position.  However, since the dressage saddle fit and it looks nice in photos I went with that one for Saturday morning's ride.  I got some video as a baseline so in six months I can reflect back on his first rides and how far he's come.  It's a little long, but the video can be seen here:

I also got some lovely photos of Schwartz riding and standing tacked up.  He's really a beautiful and sensitive horse with nice conformation and a quiet temperament now that he is confident with me handling him.  He has nice impulsion, suspension, and a great big stride, too, which will be fun to develop. 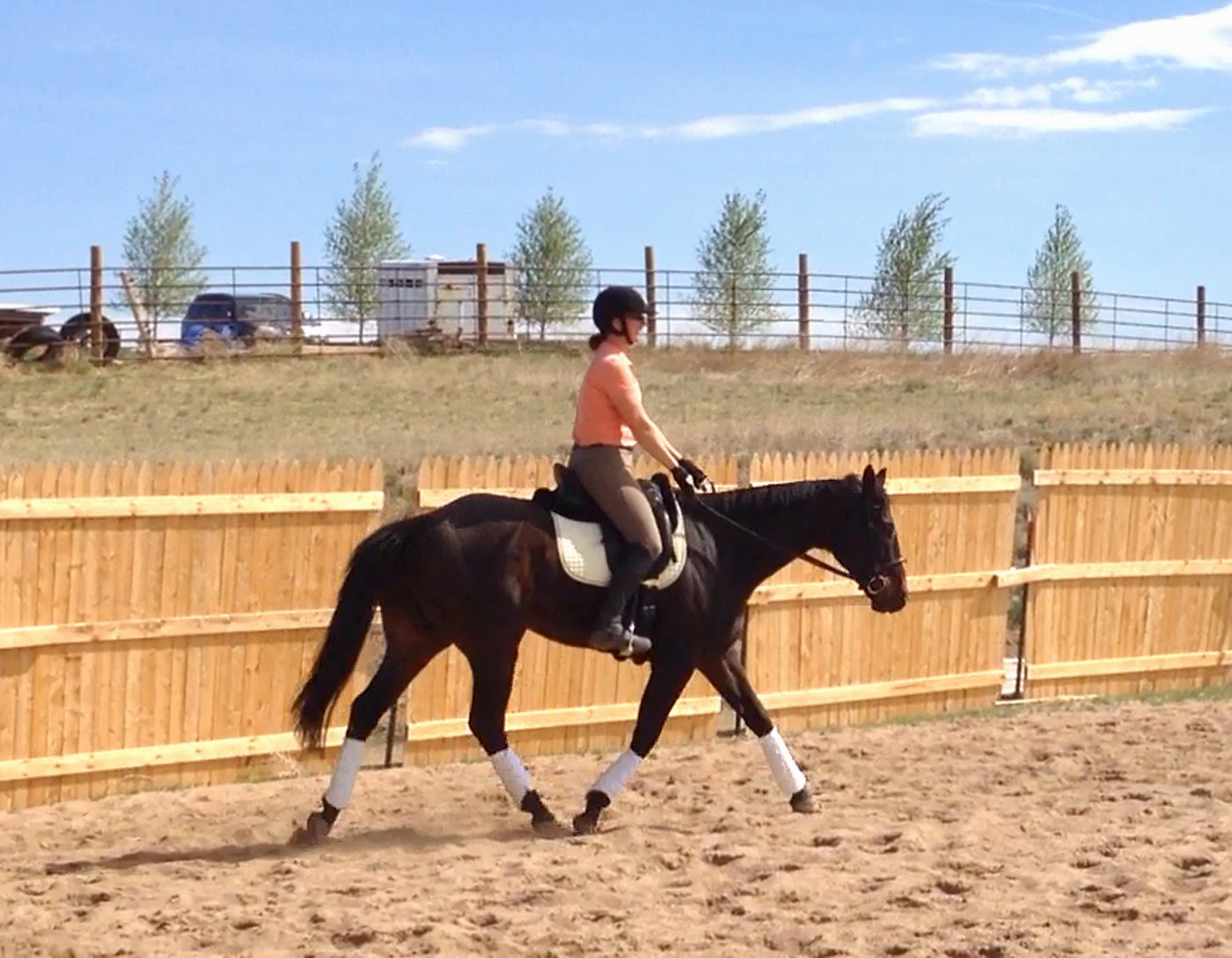 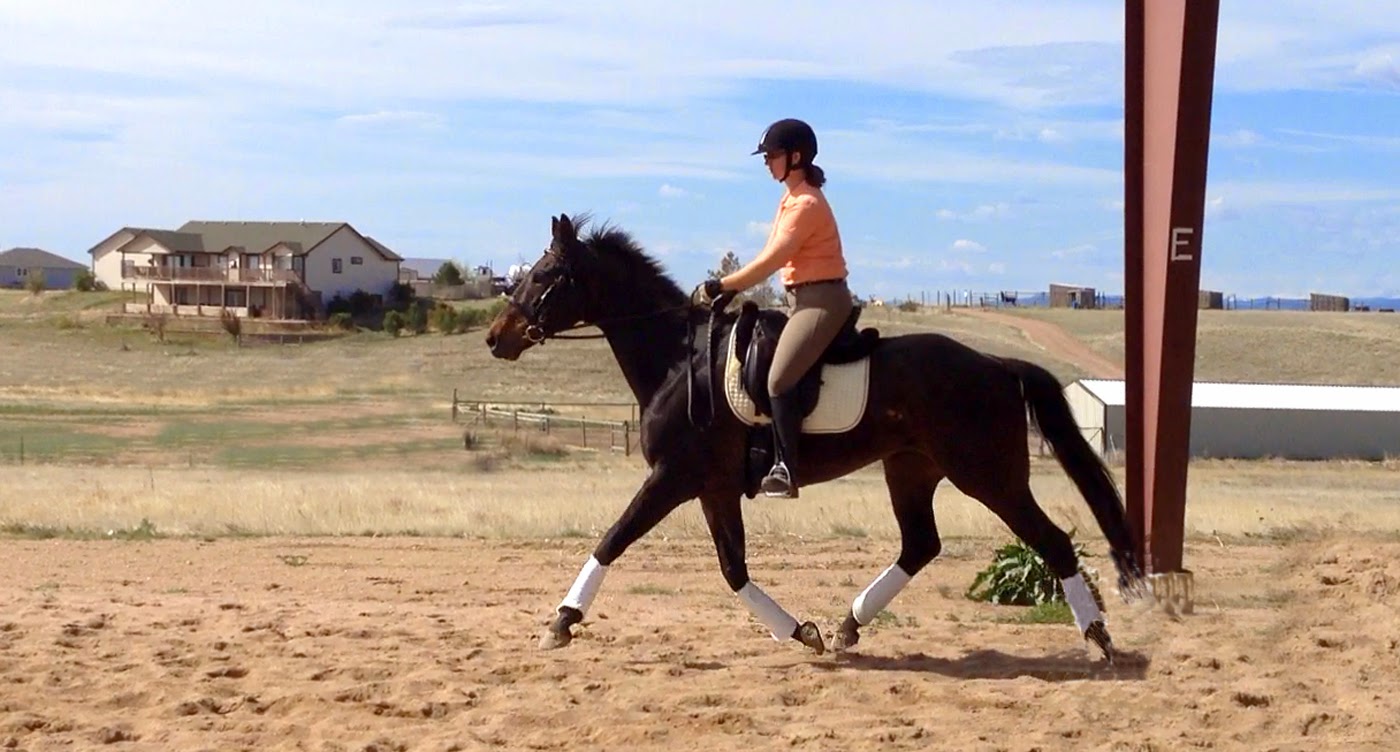 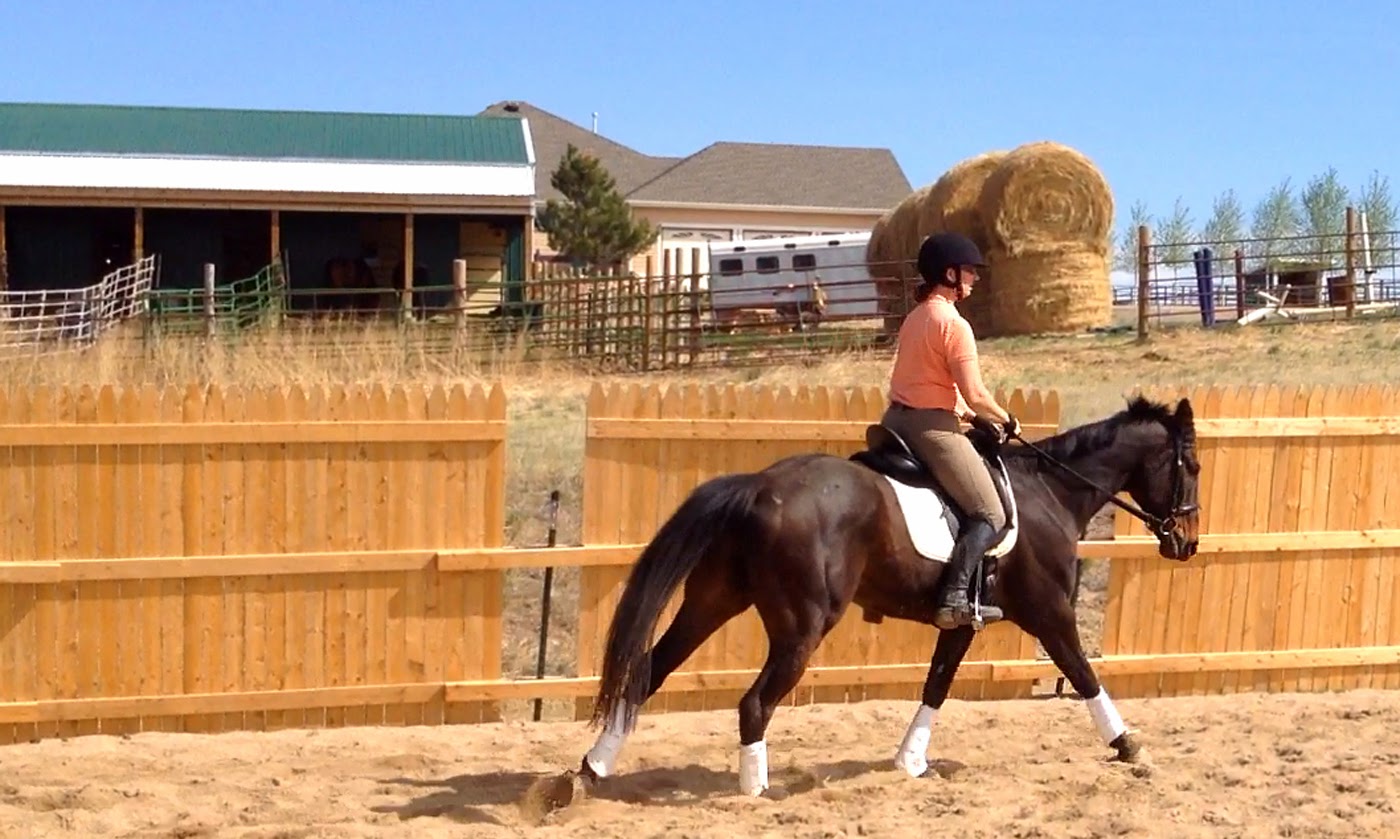 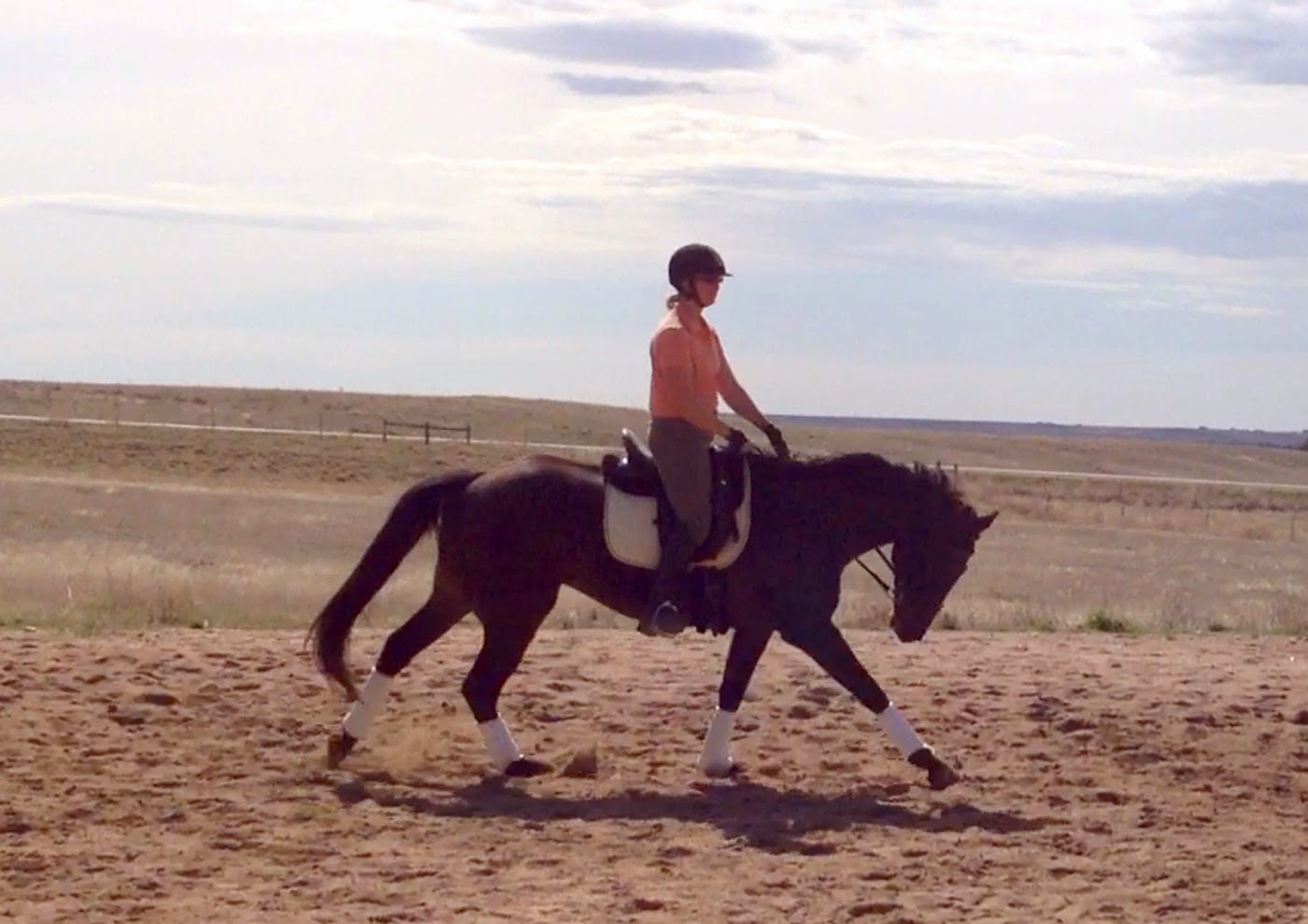 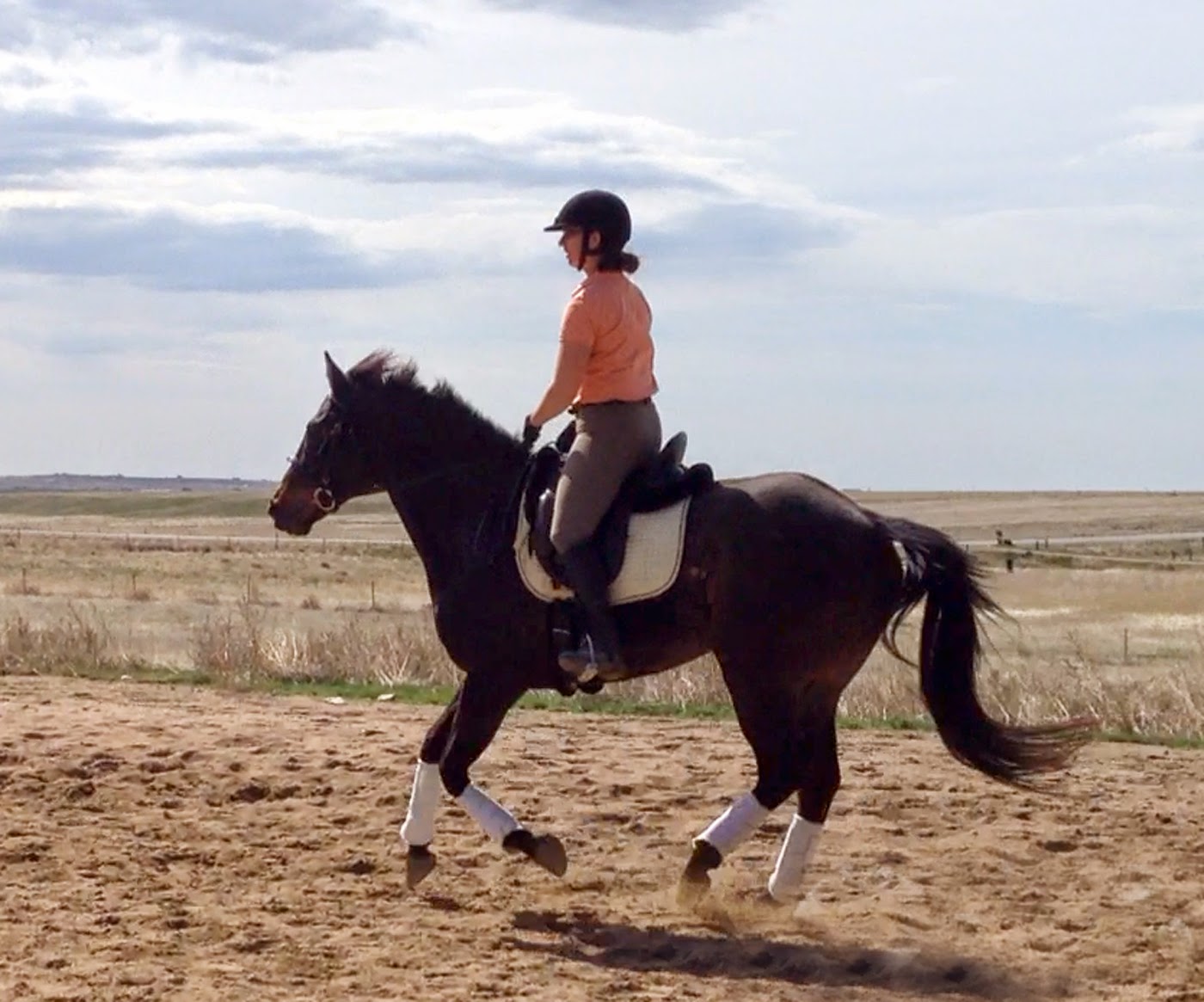 He has turned out to be a really cool gelding, and I'm very excited to see what he decides he wants to do as a sport horse.  I'm still cognizant of his back story and the quirks he displayed in his previous homes, but so far here he has been not just very reasonable, but also showing a lot of potential. 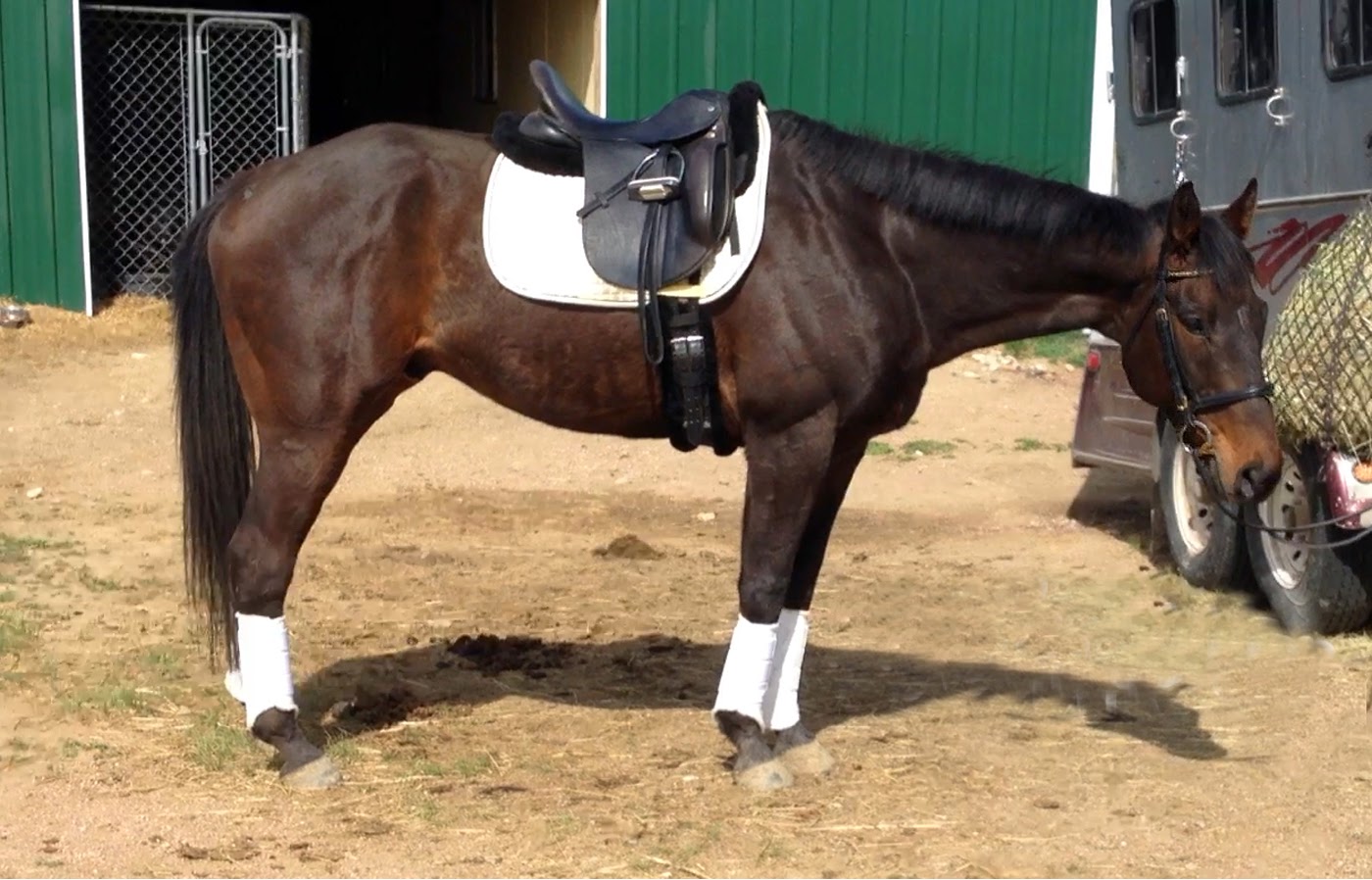 Posted by Bit of Honey Training LLC at 10:40 AM