Sometimes I wonder if my job is actually to train eventing horses, or is it to convince horses that they would rather event than be broncs?  Note had quite a day today.  He's had nearly a year off after he injured his left front pastern while playing.  The injury has taken a really long time to heal.

This week he's been looking pretty good, so I've ridden him a few times.  When I'm teaching a lesson to someone else and riding him he's mannerly, because he knows we're not doing anything heroic while I'm coaching.  Today, however, he realized this was a ride for HIM, not a light hack for easy exercise. 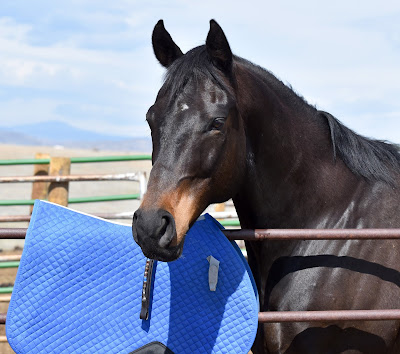 Walking was ok to begin with.  I was riding with Beauty and Alice.  Note likes Beauty because she's a GIRL and he does love the ladies.  When people ask me about Note's personality, I describe him as "that guy you remember from college who knew he was really good looking."


Trotting wasn't too bad either, he had some very nice moments when he began to lengthen his topline and stretch his head forward and down.


Beginning to hop over the crossrail in an attempt to get a civilized canter was another story.  He was pretty clear that he wanted to take off running after the minuscule crossrail, and when I didn't let him he got frustrated with me because clearly I was doing it wrong.

I elected not to ride him through his temper tantrum, so I put him on the lungeline.  He was then frustrated with the dogs for trying to make him mind, and he started aiming.  I have remote collars on them, so they each got a little warning then a small zing when they got too close to Note.  Better to have a little reprimand from your collar than actually get kicked by a horse.


Once I had him behaving reasonably well on the lungeline, and got a mannerly canter in each direction on each lead, I mounted again.  I didn't care what lead he was on, or what it looked like, I just wanted him to canter without bucking and without throwing a fit.  Note's a tricky one because he's smart enough to realize that in the past when he takes the wrong lead I stop him, reorganize, and then ask him for the correct lead.  He's also incredibly athletic, and has no difficulty swapping leads in flying lead changes whenever he darn well feels like it.  Today he was trying to mess with me by changing leads in the front, in the back, doing clean lead changes, anything he could do to try to get my attention and have me react.

In my experience, ninety percent of the time when a horse is having issues it's rider-caused.  Either the saddle or some other piece of tack doesn't fit right, the rider is making mistakes with cuing or balance, the horse needs dental work, or there's a soundness issue.  In this situation I've ruled out all of the above, and I know Note well enough after four years that I can tell the difference between when he's trying to tell me something is wrong or he's trying to get a reaction out of me.  Today he was going for the reaction.  I didn't comply (I can be just as stubborn!) I told him I didn't care what lead he took or changed to, he just had to do it without bucking or bolting.  Eventually I did get the canter I wanted for short periods of time, so I took it and quit.


When we were all done I took him for a leisurely walk around the pasture.  He strolled along on a loose rein, with the dogs at our side, just enjoying the scenery.  Apparently the wide open field is much more interesting than the arena so there's no need to create drama to amuse himself.

I went back to the barn, untacked and hosed him off, and took the dogs back to the garage.  You know it was some hard riding when the dogs both meander into their kennel, then into each of their crates and fall asleep before I can even get the dog food into the bowls for their lunch.

Within a couple hours I was starting to feel the aftereffects of the ride...  I downed some gatorade, ate some lunch and rested.  At dinner this evening I mused aloud wondering if Note was as sore as I was?  I went back out to the barn after dinner to check on him and give him some supplements to help him with muscle recovery.  If I'm this sore he surely has to be sore as well.

Going into his paddock he walked over to the gate to greet me with a somewhat stiff gait.  Clearly he was feeling about like I was.  I palpated his shoulders and found him to be tight and sore too.  He nuzzled my shoulder in return, as if to remind me that it had all been all in good fun.  I gave him his recovery mix.  Lastly I gave Highboy a few cookies, as he stood attentively at his gate explaining to me that I should have ridden him because that would have been even better.

As I left the barn for the evening with the dogs I looked back at Note, who was still eating his supplements.  I said to him, "Note, we're getting too old for this."  He cocked an ear in my direction and glanced at me, very clearly responding, "Oh yeah?  Speak for yourself."  I love him, but he sure is salty!

Posted by Bit of Honey Training LLC at 8:06 PM

Email ThisBlogThis!Share to TwitterShare to FacebookShare to Pinterest
Labels: OneForNothing