Nikki Work from The Fence Post newspaper wrote a wonderful article about the Equine Comeback Challenge from last month when Dewey and I did our Wizard of Oz freestye in Denver at the Horse Expo. 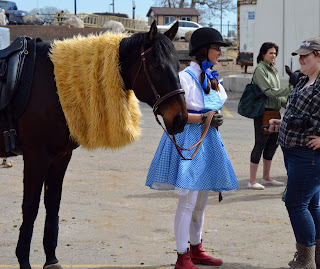 Here is the video from our freestyle:
https://www.youtube.com/watch?v=uZ0veZzQ7wI

And here is a link to The Fence Post article:
http://www.thefencepost.com/news/21195179-113/equine-comeback-challenge-offers-second-chance-for-rescue

For ten horses and trainers, the Equine Comeback Challenge March 13 at the National Western Complex was a competition.

For Kim Leonard and four-year-old thoroughbred Dewey, it was like coming home.

So Leonard dressed as Dorothy from “The Wizard of Oz” — complete with sparkly red shoes. Her border collie wore a sign around his neck labeling him “Toto.” She slung a furry gold scarf around Dewey’s thick brown neck. He was the cowardly lion.

For a rescue horse that found his forever home because of the challenge, there’s no place like the arena.

Leonard and Dewey may not have been competing this year, but they still got to ride in the freestyle portion of the challenge as an exhibition performance to show just how far a rescue horse can come with a little TLC.

Last year, Leonard trained Dewey and brought him to the Rocky Mountain Horse Expo to compete. They didn’t bring home the big prize in the way of dollar signs and accolades, but instead, Dewey got a gift of his own. A few months after the challenge, through the work of his trainer, he found an owner.

This year, Leonard, owner of Bit of Honey Training LLC, trained a horse for the challenge, but right before the weekend of the competition, another horse kicked him. Though the horse, Touch A Prince, is doing fine, the injury left him benched for competition.

Luckily, she had an old friend chomping at the bit to come play again.

“Being able to take these rescue horses who, they’ve done nothing wrong, they just end up in rescues because they’ve had cruel humans, is sort of my way to give back to the industry and draw attention to the need for training for these unwanted horses to make them wanted,” Leonard said.

Dewey was born to be a racehorse. From birth he trained for it, but he never saw a track. His sweet disposition didn’t make for a race-winner, Leonard said, so he ended up in a rescue.

All the horses in the Equine Comeback Challenge have a story. Some, like the Arabian trained by Brittnee Woodward, Lost Legend, were found running loose.

Others, like Siesta, the horse trained by Justin Dunn of Dunn’s Horse & Mule Company, were neglected. Siesta was 160 pounds underweight and was very shy and wary of people. Even so, Dunn said she was one of the easiest horses he’s ever trained. Dunn and Siesta’s freestyle routine was done to the tune of “Let it Go,” from Disney’s blockbuster “Frozen.”

Dunn adopted Siesta after training her, something Joleen Goyins, a friend of Dunn’s, said is characteristic of his personality.
“He’s a softie,” she said.

Ben Grogan, a trainer from Golden, Colo., adopted his horse, Tivoli, as well, so he could continue to work with her. He said she wasn’t ready to go out and ride with anyone else yet, so he wouldn’t dream of selling her and putting anyone in that situation.

Plus, through getting ready for the Equine Comeback Challenge, the horse and trainer formed a bond.
As Grogan and Tivoli galloped around the arena, the crowd cheered. The Quarter Horse slid into quick stops and followed Grogan’s every tug of the reins, the trust between the two evident. She’d come a long way from the scared, neglected mare he started working with at the beginning of the challenge.

“It’s been a lot of fun,” Grogan said. “I think she’s got a bright career ahead of her because she’s so athletic and talented.” ❖ 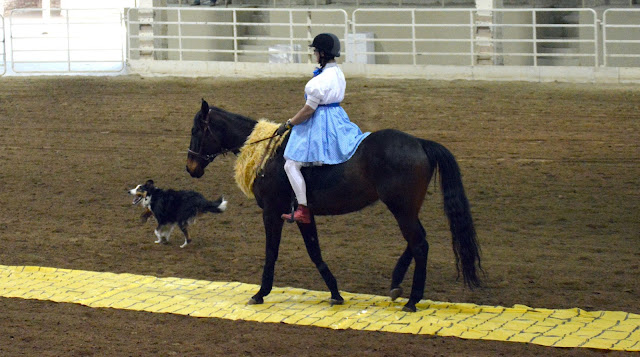 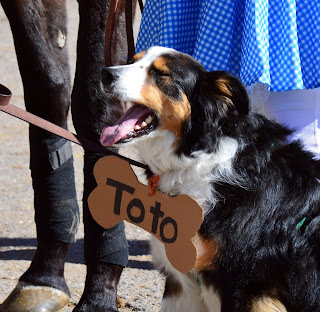 Posted by Bit of Honey Training LLC at 12:02 PM