I stood in a good sized paddock adjacent to the riding arena.  There were trees in the paddock and some small patches of grass beginning to show through the New England spring mud.  A five year old paint mare was loose and had not let anyone catch her for more than a week.  We were keeping her water full and throwing hay to her a few times daily but she wouldn't approach the feed until all humans had backed away from the fence line.  She had just returned from a new trainer who had been very rough with her.  When things climaxed and she purposefully reared, throwing herself over backwards in an attempt to crush him in the saddle he declared her "untrainable" and sent her back to the breeding farm where I worked.  She had been in this paddock since her return, and she wanted nothing to do with anyone on two legs.

For several days I had been watching this mare, quietly following her at a distance around the paddock trying to get her to allow me to approach.  She was very intelligent and would use the trees to cut me off and to turn around, thus avoiding me.  When others had attempted to catch her by force she would attack with teeth and front hooves, and if cornered would double-barrel kick at whoever held the halter.  No amount of chasing, whips, or yelling did anything except magnify her angry "I'll get you before you get me" behavior.  I was spending my lunch hours at the farm trying to figure her out, but so far had not had too much luck.  After the first week she was at least tolerating my presence on her side of the fence, and she wasn't coming after me which was nice.  I was willing to settle for polite indifference.

This lunch hour I had given up trying to make progress with her.  I had my orange, my peanut butter and jelly sandwich, and my big plastic cup of water, so I sat down on a tree stump with my napkin to just eat my food and ignore her.  She stood in the far corner of the paddock, watching me.  As I ate my orange, she turned towards me and took just a few steps.  I finished my lunch, she retreated to a different corner, and we adjourned for the day.  But this episode planted a seed in my mind.  Since approaching her and attempting to control the interactions had been completely ineffective, why not see what she was willing to do when I asked for absolutely nothing?  Doing things hadn't worked, so I would try NOT doing things.

The next day I returned to the paddock with my routine lunch of orange, PB&J, and plastic cup of water.  The mare was in the far corner of the paddock as usual.  I went in and returned to my seat on the tree stump and began to eat my lunch again.  This time over the course of my meal she approached, coming about halfway to me.  Then she wandered around the paddock, always keeping her distance and keeping one eye on me.  When I was done eating I left again without attempting to interact with her.

I continued in this fashion for probably three weeks, eating lunch while the mare watched me.  One day as I sat eating my sandwich she meandered around and then came all the way up to me, approaching from behind.  Though of course I knew she was there, I refrained from turning around to look at her or trying to touch her.  I saw a pink nose very slowly, ever so slowly, creep up from behind me past my forearm towards my sandwich.  A couple times the nose retreated with a snap, but then it would gradually reemerge into my view.  I held very still, breathing deeply to avoid disturbing the nose with sudden noise.  The nostrils grew a little larger as she sniffed the sandwich, then became smaller as she exhaled.  I held very still as the velvety lips almost grazed my hand.  The long whiskers of her chin brushed my thumb, then her lips opened very slowly and she gently grasped my PB&J.  I let go of the sandwich, and the nose retreated with it.  I then turned and looked at her and she of course backed further away from me, but she held onto the sandwich and ate it.

That day started my friendship with Docs Bit of Honey.  Many years later I named my stable after her, Bit of Honey Training, because she is the horse who taught me to listen to the horse's opinion. I was eventually able to catch her, and before long she would come when I called her by name out of the larger broodmare herd.  She let me put her under saddle, and though she would not let anyone else handle her for several years, with time other people were allowed to ride her.  We jumped, won a lot at competitive trail riding, and rode on the beach with friends and in the ocean.  One of my favorite memories is galloping her bareback on the beach.  We knew there was a wash up ahead where the waves had carved out a pool in the sand, since we had ridden around it before. It was a several foot drop into the ocean water, but good footing up to and then in the water.  As we ran towards the drop I sat tight, and I figured Honey would stop and then step down the ledge.  Honey had other ideas.  We galloped right up to the edge, then launched into the air and landed in water at least three feet deep, causing huge waves to gush out to either side of us in a giant splash.  We rode/swam to the other side, all smiles.  Many of my favorite memories with Honey involve galloping on trails, on the beach, and jumping logs.  I suspect this is when my love of cross-country jumping began. 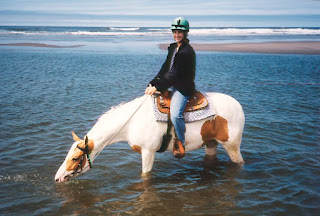 Eventually Honey became a solid riding horse, and I sold her to a lovely family whose young daughter grew up with her.  That family has kept her ever since, though after their daughter outgrew Honey she became a riding lesson horse.  I have since lost touch with them, but my memories of Honey and the PB&J that broke the ice have stayed with me.
Posted by Bit of Honey Training LLC at 7:52 PM