I had three riding lessons today that I really enjoyed.  The first group was my friend Linda who is generously letting Owen and I live at her house with so many of our animals.  She was riding her morgan mare, Gigi.  Also riding in that lesson was my other friend Sally, who is generously letting us keep most of our house stuff in her garage.  She was on her morgan mare, Rosie.  Both are quite good riders with lots of years in the saddle, and they both wanted some fine-tuning for their position and their horses' responsiveness.  I introduced the fruity centers technique!

This idea comes from my instructor certification group, Centered Riding.  I started by having Linda and Sally put one hand on their belly, with the thumb on the belly button so the hand is quite low.  Then I had them put their other hand on their low back.  I did the same on the ground.  We all took a few deep breaths, moving the back hand with our exhales.  Once we each had a good idea of our body's "center", which is actually the human body's center of gravity, I asked each of them to imagine it as a fruit.  Then I asked which kind of fruit they pictured.  Linda came up with a cantaloupe, Sally imagined it as a watermelon.  I then sent them out to ride and think about the fruit.  Once they were in a good rhythmic walk, I told them to mentally shrink the fruit down to like peach size.  Both horses stopped.  When they changed the fruit back to original size the horses walked again.  This also worked within a gait, depending on how dramatic the fruit size change was.  For example, if Sally wanted very small steps within the trot from Rosie, she would imagine a plum, then go back to watermelon for the extended trot.  Linda preferred going from honeydew melon to peach.

I like this exercise because it's a very simple way to change the horse's pace without having to over-think it.  Mentally changing fruit sizes actually causes several things to happen in the rider's body.  When the fruit is small, the rider doesn't swing as much through her seat (by "seat" I mean everything between the bottom rib and the rider's knees).  When the fruit is bigger the rider will almost roll her pelvis to accommodate bigger motion from the horse, and both mares responded beautifully.  Also, the fruit visualization has a stabilizing effect on the rider because it makes her focus on the location in her body that is her center of gravity, thus getting her body to relax and drop her center lower, which makes her more like those kids' toys that are a punching bag that can lean any direction but never tips over.  It's always interesting to me to learn what type of fruit the rider conceives as her center.  Sometimes people start out big, like Sally with her watermelon.  Occasionally I have someone who imagines her center as a cherry or a grape.  Most of the time it's an orange or apple. 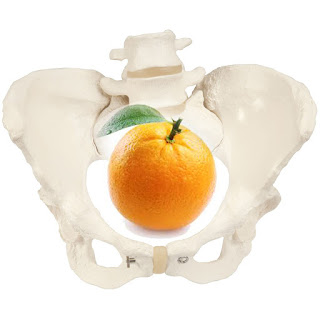 The peach analogy was particularly effective for Linda, because she is just returning to canter work after some time away from riding.  When she gets tense or nervous she tends to perch on her toes in the tack.  When I told her to squish her peach down and let it juice around the saddle and drip down the sides, voila'!  She relaxed and settled deeply into the saddle.  We did have one direction that is a little easier for her to canter than the other direction, but we just blamed it on an asymmetrical peach.  Next time we'll imagine a very equally squashed fruit.

After Linda and Sally were done with their lessons, we used Gigi to do a brief lesson with Linda's daughter who is seven.  She was understandably nervous about riding since her pony who recently passed away was infamous for bucking kids off.  Today Linda's daughter prepared well, donning her jeans, paddock boots, and helmet, and coming into the arena when it was her turn.  She initially told me that she was very scared to ride again, but she knew that Gigi liked her and was willing to try.  As the three of us walked to the mounting block together she became a little tearful and confided in me that she was really scared.  I told her it's ok to be scared, and that everyone is scared sometimes.  I told her having courage is being scared and doing the scary thing anyway, and I knew she was a brave kid.  To get warmed up she led Gigi from the ground around the arena, practicing taking deep breaths and saying "walk on" and "whoa" just like she would from the saddle.

Once she was comfortable leading Gigi, we approached the mounting block again and she got onto the top step.  She became a little tearful and said she was scared again, so I told her that being scared is ok, that it's brave to do it even if you are scared.  I then told her how I get horses used to being mounted.  I told her to pat the saddle flap and the stirrup, then to pat the saddle seat, then to reach way over and pat the other side.  This had the combined effect of getting her to touch the tack and the horse when she was afraid it would suddenly move, but it was a benign enough maneuver that it calmed her some.  Then I had her get off of the mounting block and we led Gigi around in a small circle together to calm down.  Back to the mounting block and patted the saddle all over again, and I confided in her one of my trade secrets, that sometimes when I pat the saddle I make a farting noise ("blowing raspberries" with my tongue between my lips) to get the horse used to that, too.  She thought that was pretty funny, and it's hard to be scared when you're laughing.  So we did that together, then got off the mounting block and walked another small lap.  On the next try she actually put her foot in the stirrup and stood up, then we got off and walked a lap.  Next time she actually got all the way up and sat in the saddle, walked two steps, then dismounted (with help).  The next time she mounted, smiling, and we did a lap around the arena practicing "walk on" and "whoa" to help her feel in control of the horse, and I had a lead rope on Gigi so I was there as moral support, too.  By the end she was smiling and talking about what a great rider she is.  I love that kind of progress and confidence.  She did ask, confidentially, if I ever got scared when I had to ride a horse.  I told her absolutely, but being brave is getting on anyway.  She seemed satisfied with that.  We walked Gigi back to the barn and untacked.  Overall a great afternoon of fruity centers and brave riding.

Posted by Bit of Honey Training LLC at 7:47 PM