Today was really beautiful weather, I simply HAD to take advantage of it even though I'm still fighting being sick.  First thing this morning the farrier came by to trim a few horses, and I introduced Grace to him.  She didn't need her feet trimmed this visit, but I like the horses to meet all the people who come by so they learn all kinds of humans are friendly and trustworthy.  I've been picking up her feet several times each day, and so it wasn't a big deal when the farrier did the same.  After the farrier was finished with the horses who needed him and had met Grace, he headed out to his next appointment.

I have noticed that Grace is more hesitant to approach people who are wearing gloves, so everyone who comes over has to put on gloves of some type and give her cookies.  Lest people be concerned, these are very small pelleted horse treats that won't significantly add to her calorie load.  I have put her on Platinum Performance vitamins with a handful of soaked beet pulp, since Platinum has everything a horse in training needs nutrition-wise and will make up the difference in protein, omega 3 fatty acids, lysine, and other limiting agents for even very high quality cut and dried hay.  She of course has unlimited timothy hay and water.

Grace's workout today included an introduction to the spray bottle.  It was the first thing I've introduced to her that she thought was really scary.  Although she likely had been around spray bottles before, the one I was using was a dark color with a white label (contrast is alarming to horses), makes a funny noise (suspicious noises can be alarming), and smells bizarre since it contains a waterless cleaner that I use on the white horses when it's too cold to bathe them (scary smells).  The first squirts nearly sent her leaping over the fence!  I apologized and explained I'm not TRYING to scare the daylights out of her, but it's an unfortunate consequence of being a white horse that she needs to be scrubbed with smelly things.  Sometimes people chuckle at me when I give a horse the explanation, but I think the horses understand far more than we give them credit for.  Grace still wasn't happy about the spray bottle or the funky smell of the cleaner (I like it, smells like orange creamsicles), but she let me saturate a brush near her as long as I stood between her and the spray.  Then I would brush her with the moistened tool after giving her a cookie so she associates the spray and smell with treats.

I get horses used to this kind of thing carefully, my first step is to let them hear and smell the spray while I stand between the horse and the bottle.  This position has a couple redeeming points.  First, if the horse panics and leaps away from the bottle, the horse is also leaping away from me so I won't get squashed.  Secondly, because I'm closer to the monster the horse can see that the scary thing would eat me first so she's more likely to be safe.  Thirdly the horse will begin to see that I will always protect her and be a buffer between her and something scary, which builds a lot of trust.

After we were done messing with the spray bottle Grace was still stained, so forgive our odd colored photos.  Her mental health was more important than white hair.  I put the pad, saddle, and girth on her and we headed back to the round pen.

We did some more walking and trotting, changing directions often so she won't get sore from circling the same way all the time.  She wasn't bothered at all by the stirrups swinging around and bumping her sides after the first lap or two.  She is such a reasonable mare, as soon as she decides something is ok she doesn't stress about it anymore.

We also do a lot of work with ground poles, which keeps her thinking about her feet and focused on what she is doing.  I never just run a horse around in the round pen, there is always a purpose in getting them to think and consider.  She's very good with the poles, she almost never hits them and is very coordinated in her hoof placement.  This is one of the perks of working with an older horse.  The youngsters take quite a bit of time figuring out that they have FOUR feet to keep track of, and pole work helps them with this but is quite challenging to young horses learning how to be coordinated.  An older horse like Grace has no trouble with this because she is mature and knows how her body works. 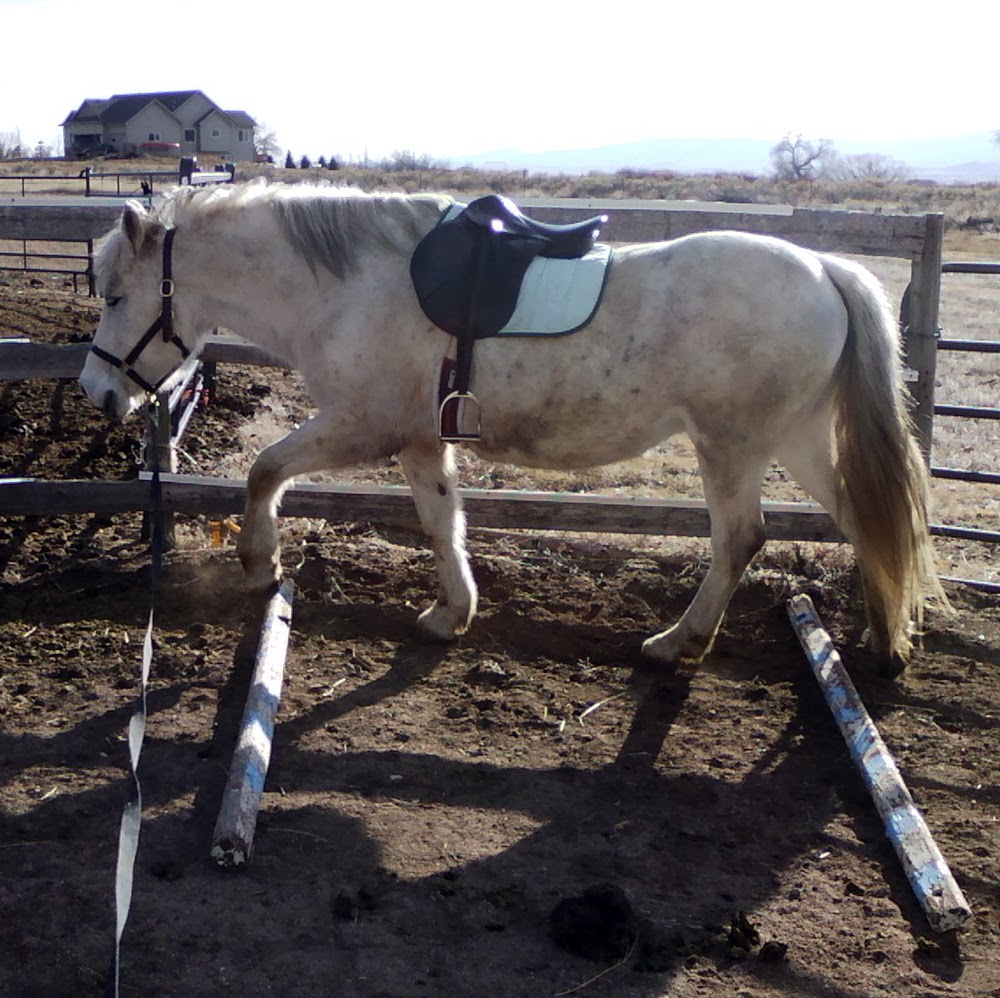 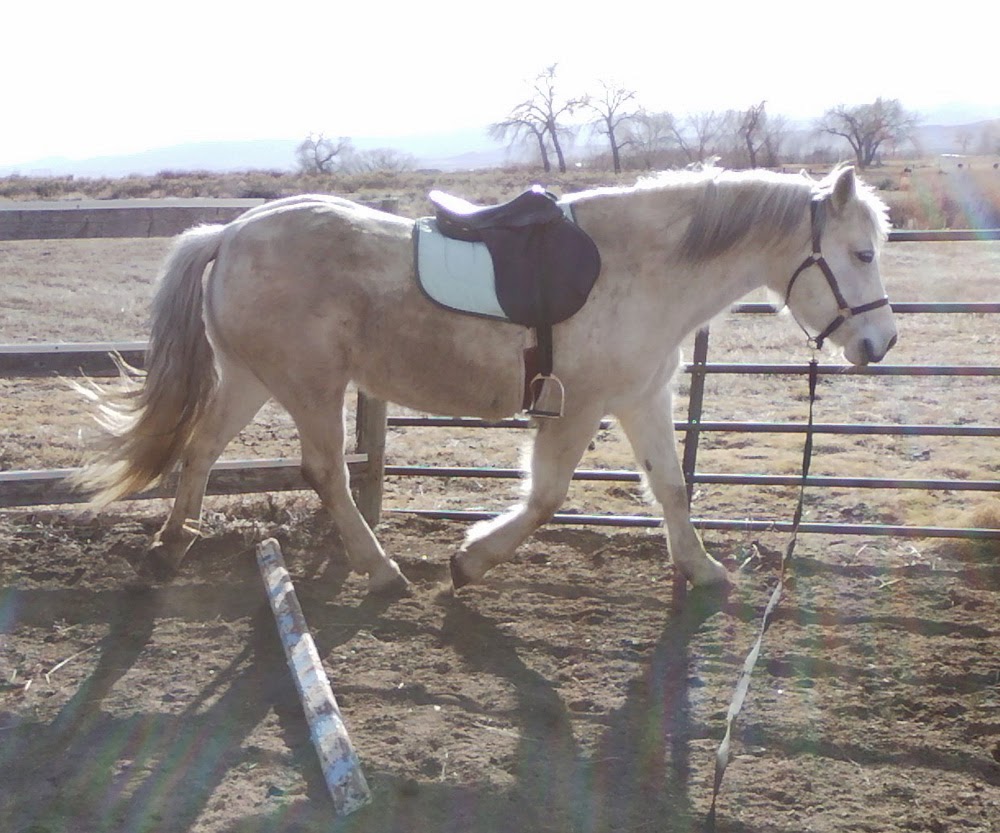 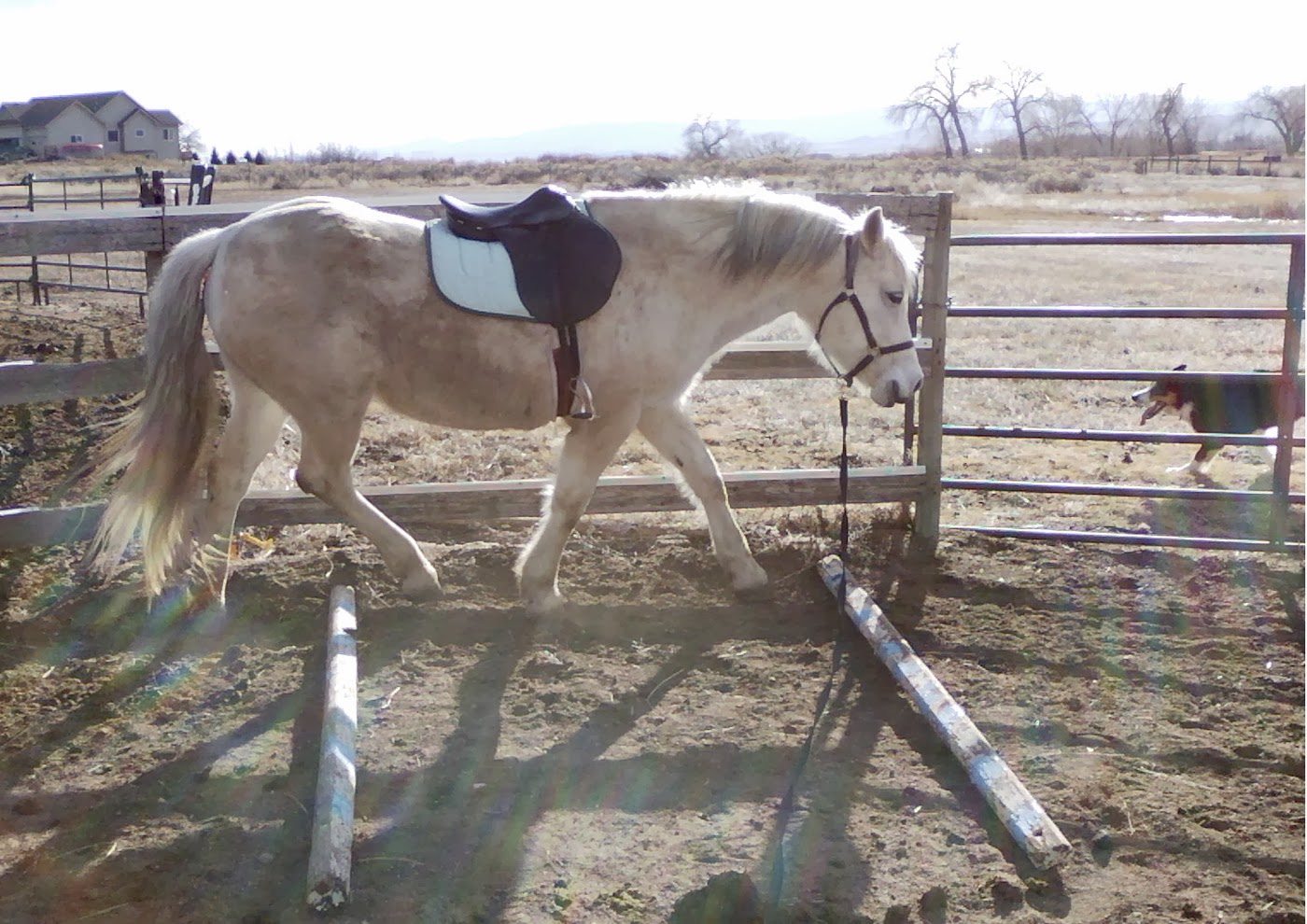 After the round pen we went to the big arena again, and just lunged at the walk to cool her out.  This is a big step for a horse because when we are in the middle of a large space there is no fenceline for her to use visually as a steering/balancing aid.  It didn't matter.  She totally gets the idea of lunging now and walked around like an old pro. The first time she walked toward a large pile of scattered poles she went right up to them and stopped.  She then turned her head and looked at me to ask what she was supposed to do?  I told her she could pick her way through them or go around, her choice.  After a moment to consider her options, she decided to go through, carefully placing each hoof between poles, and stepping entirely over some of the larger groups.  Smart mare.

We also went through the tires a bunch, there was no hesitation today.  She followed me over them the first time, and then was happy to go through them herself on the lungeline.  Once Grace understands something is safe and how to do it, she never worries about it again. 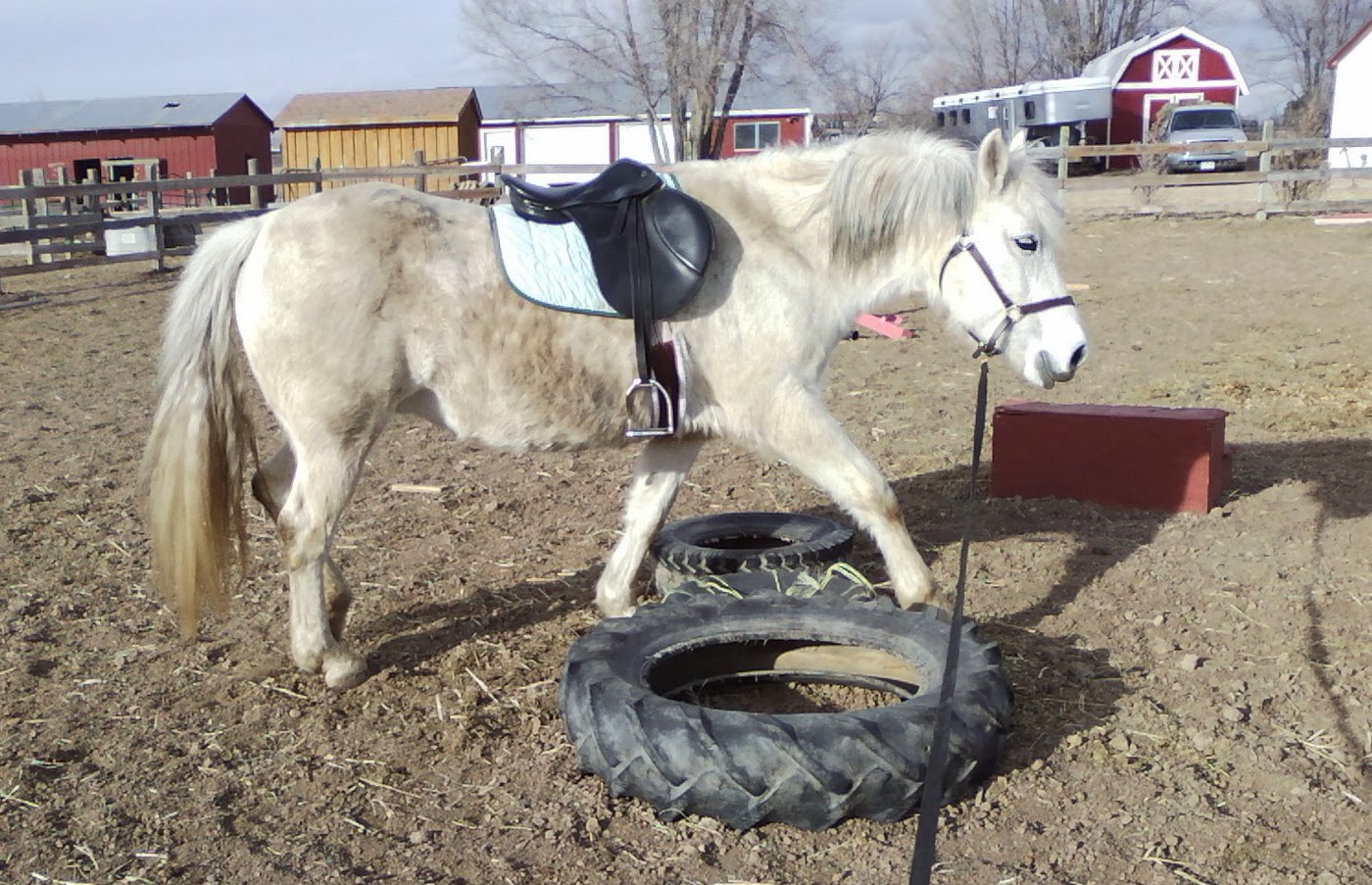 The last challenge for the day was a basketball.  My dogs LOVE fetch, and they have their own partially deflated basketball from Goodwill that they carry around with them.  When the ball is placed near the horses, some of the geldings will pick it up and throw it for the border collies.  It's standard protocol here at Bit of Honey for horses to get used to all kinds of things flying through the air...  sticks, tennis balls, frisbees, basketballs....  and most of them are retrieved and then dropped under the horses.  Grace wasn't too sure about this scenario, and she made some funny faces at both the basketball and Belle the border collie.  It wasn't overly alarming, though, and Grace and I were able to untack without too much concern.  I then put her back in her paddock, and boy is that sweetheart looking tired.  Her brain has been on overdrive since she got here, so it's probably just as well that the weather will be miserable tomorrow and she can have a little time to think and process all that has happened in the past few days!


Posted by Bit of Honey Training LLC at 6:01 PM